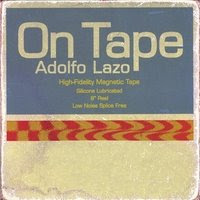 San Francisco-based Adolfo Lazo has spent the last 20 years drumming for Celtic Rock band Tempest. Along the way he started to come up with his own songs that didn’t fit within the Celtic Rock mode. Lazo’s solo material lends itself more to a mix of Latin pop and Folk Music. His latest solo release, On Tape, blends the two styles so completely he almost becomes his own genre. Lazo reports that he started drumming around the house as a little tyke hoping to find the secret formula for invisibility. Lazo hasn’t totally given up on this dream, but the side effect of gorgeous pop tunes is a much more compelling story.

On Tape opens with Morgan, a tongue-in-cheek song that sounds like it may have been written about a disaffected teenager. The lyrics are entertaining and the basic rock arrangement here is a suitable frame. Lazo has a voice that is pleasant to listen to without being overly pretty or flashy. Two Minute Love has a distinctively shredded guitar style that is part psychedelic. The instrumental doesn’t live up to its name at 1:46, but is still entertaining. Cual Es Tu Carrera is a snappy song with a Latin rhythm that might be the best composition on the album.

Red And Yellow is very catchy. The song will stick with you. 365 is an enjoyable listen, and very poignant. Other highlights include Rice Rockets, the rockabilly Outta Vegas, and Borracho. The live version of Time To Go is a great listen as a closing track.

Adolfo Lazo is a talented songwriter and performer. He has a very guy-next-door style, and his music is very accessible. It’s the musical version of comfort food, and who doesn’t like that? On Tape plays like a favorite record of songs you haven’t heard before. It’s not exciting or flashy, but comfortable and familiar. A great effort.

You can learn more about Adolfo Lazo at www.myspace.com/adolfolazomusic. You can purchase a copy of On Tape at www.cdbaby.com/cd/adolfolazo2.
Posted by Wildy at 5:10 AM