Review: If You Will - Flight Plan 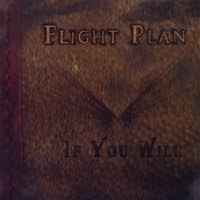 St. Paul, Minnesota’s If You Will strives to build big alternative rock songs with catchy hooks and driving beats. Through the use of unusual chord progressions and structure, two lead vocalists and a new breed attitude, If You Will brings another level of excitement to the game of Rock N Roll. If You Will’s debut album, Flight Plan, encompasses all of these traits in eleven alternately exciting and mellow rock songs.

Flight Plan opens with a big guitar rocker, Run Away. Boiling guitar riffs and rocky bass calisthenics make this an ideal first single for modern rock formats, but the song ends up sounding very formulaic. Hate Your Hate follows much the same paradigm, sounding like something that was crafted for commercial attention rather than for the sake of craft. What Doesn't Kill Us slows things down a bit, moving to a mixed acoustic/electric sound that If You Will wears very well. Everything I Am strips things down further, in probably the best song on the album. If You Will doesn't return to the heavy rock sound until tracks 9 and 10, two parts of the Flight Of Fall trilogy, which is very well written and performed.

If You Will comes across like two bands. There's the heavy rockers with strong hooks but weak vocal presence and a generally formulaic sound, or there's the sensitive adult contemporary rockers who come across as a bit cliché but marketable. All in all Flight Plan is a decent album. It didn't light up the room but it held its own. If You Will shall find a sufficient following to keep making music.

You can learn more about If You Will at www.myspace.com/iyw. You can purchase a copy of Flight Plan at www.cdbaby.com/cd/ifyouwill.