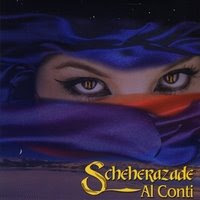 Your first thought upon seeing Al Conti is that he looks familiar. You know you've seen him somewhere before. A longtime actor, Conti has appeared on "As The World Turns" (among others), numerous commercials and even done some live theater work in New York and elsewhere. He gave up acting in 2004 to compose music full time, and has recently released his third album, Scheherazade (named for the narrator in the classic Arabian Nights tales). Conti mixes traditional middle eastern instrumentation with the more western sounding piano, guitar, violin, synth and percussion to create a stunning and eloquent collection of ten real world flavored new age compositions.

Daughter Of The City is the musical representation of Scheherazade herself, the woman who would save the female population of Arabia through 1,001 tales spun meant to stave off her death. Legend holds that Arabian Sultan Shahryar, whose heart had previously been broken decided to never be hurt again. His plan was to marry a new woman each day only to have her killed the next morning. Scheherazade began telling Shahryar stories each night, leaving the ending until the next day. The Sultan was so enraptured with Scheherazade's stories he'd let her live to hear the end of the story. While Scheherazade spent each day concocting new tales, she was also working on the Sultan to soften his heart. In the end the Sultan realized he loved Scheherazade.
Desert Nights has a feel of the ancients to it, and a gorgeous melody that soothes the ears. Shahryar seeks to enfold the majesty and power of the Sultan within its staves, and achieves its purpose with a sense of mystery and despair. Seven Veils To Midnight is Conti's representation of Scheherazade's honeymoon night, and combines an almost ambient musical sensibility with driving rhythms and strong minor key melodies to give the hidden sense of pleasure, anxiety and magic. Other highlights include A Thousand Tales; Gold And Spices and Eternal Majesty.

Al Conti writes incredibly expressive music that crosses boundaries you might have imagined as impregnable. Conti makes you forget your misgivings as they float away on the rise and fall of his moving and poignant songs. Scheherazade is a prime example of how New Age music can be vibrant and new. It's a gorgeous musical representation of the classic tale and a must-hear.

You can learn more about Al Conti at http://www.alconti.net/ or www.myspace.com/alconti. You can purchase a copy of Scheherazade at www.cdbaby.com/cd/alconti3.
Posted by Wildy at 5:44 AM