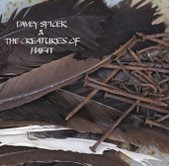 Davey Spicer & The Creatures Of Habit are a Brisbane, Queensland (Australia) trio with an eclectic ear. The band’s MySpace page implies that if you want to know about the band’s personalities to read the Diagnostic and Statistical Manual of Mental Disorders (DSM-IV). Personalities aside, Spicer’s trio has a very eclectic and unusual set of influences. Their EP, Feathers & Nails is available if you can find it. Let’s check it out!

Feathers & Nails opens with Good Man, a feel good bit of Americana. It's a classic mix of folk, rock and country with a great melody and a very memorable lyrics. It's a song that will definitely make mix-tape lists and is a highly pleasant listen. Shake It is a wonderfully energetic acoustic tune with a rock and roll attitude. Irresponsibility is a dark acoustic pop tune that sounds a little like something U2 might have written in their War days. The lyric content isn't U2, but the music is definitely in that style. The song is catchy in its dark aspect and will stick with you. You could hear some alt-rock band making it big with Irresponsibility. Liferaft slows things down a bit with a great guitar arrangement and a strong melody. Beautiful starts out as something of a dark homage and turns more and more bizarre as the song goes on. It's a bit disturbing but extremely well conceived and performed.

Davey Spicer & The Creatures Of Habit are an interesting band. I would suggest they are something of an acquired taste, but one worth acquiring. Feathers & Nails is a musician's EP. Those of you out there making music will greatly appreciate the song craft here. Spicer doesn't have a perfect voice, but its perfect for the material he's writing, and Feathers & Nails is a worthwhile experience. Check it out.

You can learn more about Davey Spicer & The Creatures Of Habit at www.myspace.com/daveyspicercreatures. You’ll have to contact the band through their MySpace page for availability of Feather & Nails.
Posted by Wildy at 5:00 AM