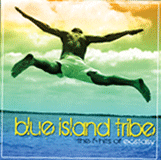 Blue Island Tribe have been together for most of this decade, originating in their university days U of Northern Iowa. Mixing Rock and Reggae with an infectious pop aura is what Blue Island Tribe is all about. For all of the positive response their four previous releases have received, Blue Island Tribe truly comes alive in front of a crowd, be it a monster crowd or an intimate house party. Blue Island Tribe's fifth release, The 5 Hits Of Ecstasy (EP), finds The Tribe continuing down their chosen artistic path with a little more maturity and a little more finesse than in the past. The spirit still burns white hot, but the delivery has been refined just a tad.

Down opens with a classic Reggae sound turning into a sound that is a slightly more pop-oriented version of Sublime. The tune is extremely catchy and has potential commercial impact written all over it. Drop Out is a bit edgier, surfing the waters of a broken relationship. The upbeat, catchy vibe of the song stands in stark counterpoint to the subject matter here. Jump And Shout is the most familiar sounding song here, with a definite Red Hot Chili Peppers thing going on. The class of the album is the fourth song, March On. It's a tribute to US troops that was born out of a house party the band gave on a military base in Korea. Apparently the band had written the music previously but didn't have words. The lyrical inspiration came mid-performance in a blur of creative magic. The song does not celebrate the military as a war machine, but celebrates the people who dedicate their lives to maintaining peace through their presence and sacrifice. The album closes out with Ecstasy, which is probably the most pop-oriented. If you remember the commercial and appealing mix of reggae and pop that Eddy Grant achieved in the early 1980's then you have an idea of the sound here. Very smooth and slick, Blue Island Tribe may have found their first true hit here.

Blue Island Tribe continues to spread their musical moments of joy through 200 shows a year, but somewhere along the way they've grown from raw musical creationist to songwriters and artists. The 5 Hits Of Ecstasy shows The Tribe stretching their creative wings and attaining a higher level of musicianship and song craft. A very strong and enjoyable recording that's much too short, but otherwise without complaints.

You can learn more about Blue Island Tribe at http://www.blueislandtribe.com/ or www.myspace.com/blueislandtribe. The 5 Hits Of Ecstasy is currently only available as a download through iTunes. A hard copy was originally scheduled for November of 2008 but has been pushed back until March of 2009.
Posted by Wildy at 5:10 AM