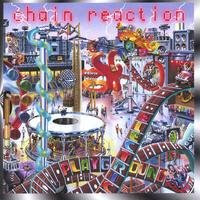 Electric Playground opens with Shallow Valor, a treatise on the downside of fame. The song has a great driving guitar part. The very open sound of the CD gives the impression of a live performance or even dropping by a friend’s house to check out his garage band. This adds an enjoyable twist. Up next is a very reverent cover of Cream's White Room. There’s nothing new here, but if you like the original you’ll have no complaints with the Chain Reaction cover. Burnin’ Midnight Oil has some interesting guitar work to it. It’s a good song but I couldn’t get too excited about it. The Party Principle is an update of Chain Reaction’s own original song. Once again, the guitar work is interesting (quite excellent, really). The vocals are competent, but I just had a hard time getting interested in the song itself.

If You Only Knew is a sweet song of longing. This one sounds just right. I suspect that if the right band were to pick this up and cover it we could be talking big hit. It almost has a Mark Knopfler feel to it. Honey Child is a great party tune. This is the sort of song that will keep your feet moving on a Friday or Saturday night. It’s inspired by the blending of blues and rock that Eric Clapton built his career on. Where’s The Beauty is the most modern sounding track on the album. I could hear this having some minor commercial potential. The disc closes out with a Hendrix-inspired version of the Star Spangled Banner, done as a tribute to US Troops.

Chain Reaction is a sharp Rock N Roll outfit. I suspect their live shows are quite fun and lively affairs. Electric Playground I am very mixed on. There is some good to great material here, but the production seems to stifle the band/songs. The production values here sound very 1960’s/1970’s – the sound is repressed and held at bay. Shallow Valor is the only track that sounds at all raw, but raw Rock N Roll seems to be what Chain Reaction is about. The disc is misleading because it makes Chain Reaction sound less energetic and alive than they undoubtedly are. It’s a shame. Electric Playground is a decent listen when it should be, at least, a Very Good listen.
Rating: 2.5 Stars (Out of 5)

You can learn more about Chain Reaction at http://www.chainreactionband.com/. You can purchase a copy of Electric Playground at www.cdbaby.com/cd/chain2.
Posted by Wildy at 5:00 AM