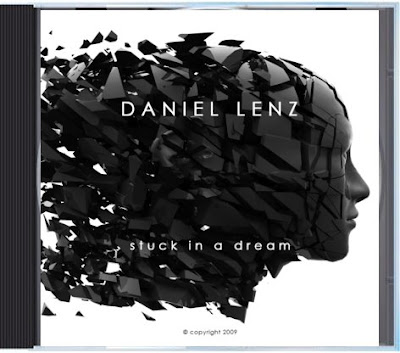 Daniel Lenz - Stuck In A Dream
2009, Daniel Lenz
Daniel Lenz is a name you should know, because you've undoubtedly heard his music before. With Wax Trax recording artists Psykosonik and Hednoize he became a platinum selling artist. As a composer his music has graced the small screen in Mad Men, CSI, Beowulf, Alias, Buffy and La Femme Nikita. On the big screen you might have heard his compositions in Charlie's Angels, Scary Movie 2, 13 Going On 30, Halloween: Resurrection and Mortal Kombat. For you gamers out there his music has prodded you along as you play MotoGP or Crackdown. His success is a product of an obsessive search for the right sound, often meaning a single composition might take until the break of dawn to perfect. On Lenz' debut album, Stuck In A Dream, he easily mixes hip-hop, soul, rock, Industrial and techno for a highly eclectic collection of fifteen sonic events.

Stuck In A Dream opens with I Do It Again, a highly energetic dance number for rockers. This is classic dance club fare that should do very well for Lenz in the club scene. Check It Out gets into an Industrial sound mixed with wrap. It's a highly unique composition that gets a bit lyrically repetitive but once again will do well in the clubs. Push The Tempo ups the angst in an industrial/hip-hop blend you have to hear to believe. This song will get you moving even if it's against your will. Other highlights include the brutal rhythms of Time To Rock, Accume, Go It Alone and Aliens.
Daniel Lenz has a distinctive style that embraces techno, industrial, rock and hip-hop in ways you might not have heard before. The strongest compositions seems to be the mixes of Industrial and hip-hop, but there's nothing here you'd call a weak track. Stuck In A Dream is a highly motivating album that will take a place among your favorite listens, even if it's as a guilty pleasure. Be sure to check it out.
Rating: 4 Stars (Out of 5)

You can learn more about Daniel Lenz at www.myspace.com/daniellenz or http://www.daniellenz.com/. You can purchase a copy of Stuck In A Dream at http://kunaki.com/Sales.asp?PID=PX00YAS67K.
Posted by Wildy at 5:10 AM