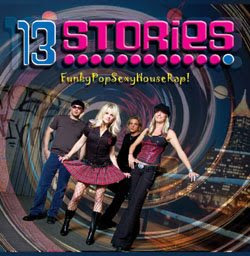 Atlanta, Georgia’s 13 Stories are a band that almost didn’t make it. They’ve played together for six years in different capacities, and almost broke up before finding the sound that they put forth of FunkyPopSexyHouseRap. A mix of power pop, rock, rap and everything else you can imagine, 13 Stories craft the sort of infectious pop songs that were all over the radio in the late 1980’s, but with a sound updated for today.

Bubblegum pop is back in a big way on FunkyPopSexyHouseRap. 13 Stories have managed to craft 12 original songs and one remix that use a lot of words to say very little. The sugary-pop confections contrived by 13 Stories are generally very danceable, and one suspects 13 Stories would do very well on the nightclub circuit. The album opens with Ride, a memorable, peppy tune that like will be remixed ad nauseum. Lexi and Beep! Beep! are both mindlessly danceable. Beep! Beep! sounds like a mix of The Spice Girls and The B-52s, and has the potential to be a major pop radio hit.

Be sure to check out The LA Song, a true Whoo-girl anthem if ever there was one. The other material here is very much hit or miss. If you're looking for intellectual music, or lyrics more intelligent than drunken bar babble among the Mighty Whoo on Friday nights, then this disc isn't for you. FunkyPopSexyHouseRap is a fun listen, even if you might not respect yourself in the morning. 13 Stories will most definitely find a niche.

You can learn more about 13 Stories at http://www.13stories.com/, where you can purchase a copy of FunkyPopSexyHouseRap.
Posted by Wildy at 5:10 AM