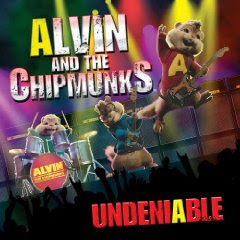 It's hard to know what Ross Bagdasarian, Sr. would think of the continued evolution of his Chipmunks. Since the re-emergence of The Chipmunks on television in 1983, the brand (and sound) has been continually updated to match the musical mood of the moment. Whether it was Urban Chipmunk (country); Club Chipmunk (dance mixes); the soundtrack to the 2007 motion picture or their latest release Undeniable, the Chipmunks have stayed almost-current with current musical trends.
One of the charms of the original Chipmunk recordings was the way in which they were created. Bagdasarian did all of the vocals himself, of his unaltered voice, and then replayed the recordings at differing speeds to create the Chipmunks' voices. Despite the manipulation there has always been something vaguely organic about the voices, allowing for at least partial suspension of disbelief. Somewhere in the last decade or so the process has gone entirely digital, using computers and vocal effects to try to recreate the original magic. As vinyl LP fans will attest, new technology isn't always an improvement. Such it is with The Chipmunks.

Undeniable definitely hits the flavor of the moment musically, but the Chipmunks voices sound like they've been digitally altered with electronic effects. For longtime listers/fans of The Chipmunks this may wreck the experience of Undeniable. I know I personally had a hard time squaring this recording with the past recordings of The Chipmunks. The album opens with the DeeTown remix of the theme song from the 1983 television series, including raps. This may go over well with new fans, but probably won't appeal as much to older fans. Shake Your Groove Thing highlights the electronic voice effect sound that I mentioned earlier. Additionally, the Chipmunks are singing background here. Generally if you're buying a Chipmunks album you're not doing so to hear someone else sing.

Livin' On A Prayer is actually an interesting vocal arrangement, but again suffers from the ultra-modernization of a classic sound. Thank You is a hip-hop/R&B radio anthem that again sounds like a computer is singing lead (and background) vocals. All The Small Things suffers from the same fate. The first song to really capture the original spirit of The Chipmunks is Ho Ho Ho. The Chipmunks (and David Seville) are now voiced by Ross Bagdasarian, Jr., and the repartee between the characters returns here somewhat, although Seville is more darkly grumpy than in the old days. The original version of We're The Chipmunks is more familiar, but still suffers from the vocal manipulation that abounds through the rest of the album. I will admit I was charmed by the cover of Time Warp, but would have preferred to hear this recording done before the era of computer based recording.

In the end, Undeniable is a decent effort that falls short of its potential on the basis of over-production and technology. While its certainly more time consuming, I have to think that a better overall product could be had by returning to the old way of recording the Chipmunks albums. Perhaps it lowers the profit margin a bit based on the time put in, but perhaps a better, more believable recording outsells the current version. As someone who grew up with the Chipmunks, I find myself disappointed.
Rating: 2 Stars (Out of 5)

You can learn more about Alvin & The Chipmunks at http://www.chipmunks.com/. You can purchase a copy of Undeniable at Amazon.com or wherever music is sold.
Posted by Wildy at 5:10 AM