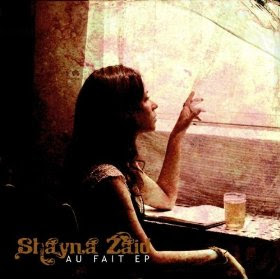 Shayna Zaid has quite the back story. Born to an American mom and Malaysia dad, Zaid grew up in Malaysia, leaving only when it became time to go to college. Zaid is something of a real celebrity in Malaysia, where she was nominated in that country’s 2007 ERA Awards for Best New Artist, Best Female Vocals and Best Pop Song. Shayna Zaid is also a television personality in Malaysia as one of the stars of the talk/variety show Speak Up. Upon arriving in the US Zaid began studies at Berklee, but quickly moved on to New York City to work on writing and recording. Her second release, Au Fait, arrives in 2008 with a sound you’ll be hard pressed to forget.

Au Fait opens with Just Because, a jaunty cabaret love song with a come hither attitude and a Cheshire grin. The arrangement is just slightly messy and wonderfully real in the cabaret style. Closer has a slightly more polished sound in a pop ballad that really features Zaid's esoteric vocal presence. Closer is the sort of ballad that sticks out in your mind after hearing it, and would have real commercial potential. It's You sounds like the sort of love song Sarah McLachlan might write. Zaid contrasts this with a voice that is closer to a throaty Norah Jones. I Remember is an almost upbeat acoustic ballad with great instrumentation woven around the melody. Take Your Time returns to the slightly muddy sound of the opening track.

It is in these muddy waters that Shayna Zaid shines brightest. Zaid has an earthy sound that is best practiced close to the ground in an organic or live sound. Zaid has a strong ability to emote and project her personality into songs, and the tracks on Au Fait live through her personality. Au Fait EP is an incredibly rich, brief introduction to Shayna Zaid, leaving the listener always wanting more. Shayna Zaid is one to watch.

You can learn more about Shayna Zaid at www.myspace.com/shaynazaid. You can purchase the Au Fait EP as a download through Amazon.com or iTunes. No word yet on a CD release. Also, several of Zaid’s songs from her previous release, Beyond Borders were featured on The Young And The Restless. These songs are also available as downloads from Amazon.com.
Posted by Wildy at 6:34 AM

This is quite interesting to know more about this story, what I like is the way this woman got to overcome of the different situations during the story.

I completely agree with everything you have printed here.