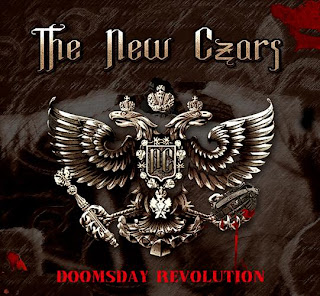 The New Czars have spent significant parts of their careers supporting other artists. Various members have spent time working with Alice Cooper, Puddle Of Mudd, Bruce Dickinson, Courtney Love, Lita Ford and Pink. Now singer/guitarist Greg Hampton, bassist Paul Ill and drummer David “Chilli” Moreno have stepped out on their own as The New Czars. Over time working with artists, the men of The New Czars started developing some of their own musical ideas. These ideas come to fruition on September 14, 2010 with the release of Doomsday Revolution.

Doomsday Revolution opens with "Keep On Goin'", a heavy rocker toward the crevice between mainstream alt-rock and Nine Inch Nails. The energy is solid, and there is a catchy hook or two buried in the sound but in the end it sounds a bit contrived. "Confessions" has more of the breakneck approach you might expect from The New Czars; driven and powerful rock and roll with no apologies and no punches pulled. "So Sure" is commercially viable heavy rock with a heavily pop-oriented chorus. It's product that will sell but doesn't necessarily reflect high quality songwriting. "Abstract Prague" is a cut-and-paste rock instrumental allowing guitarist Hampton to create some aural chaos. Full of riffs, runs and noises with little sense of progression, melody or continuity, its guitar-players self-indulgence. "Doomsday Revolution" is the catchiest track on the disc; falling closer to 1980's MTV hair metal than modern rock. "Doomsday Revolution" lacks any pretension and is the more enjoyable track on the disc for its lack. The New Czars close out with two instrumentals, "Funky Detour" and "Crotch Critters" that attest to the bands sense of sound over song.

The New Czars make a couple of real attempts at music with commercial legs on Doomsday Revolution, but generally fall into the musical cauldron where unguided self-interest and a lack of distinct musical direction meet. The result is an unfocused and surprisingly un-inspired performance. The loosest moment comes on the title track when The New Czars let their hair down and pay homage to their roots in early-1980's pop/metal, but even here there's a detachment that is somewhat frustrating. The New Czars seem to have talent, but still seem so fascinated with what they can do with their instruments to really explore how. Things will get more interesting once they make that transition.

Learn more about The New Czars at www.myspace.com/thenewczars or http://www.greghampton.com/. Doomsday Revolution drops on September 14, 2010.  You can pre-order the CD from Amazon.com.