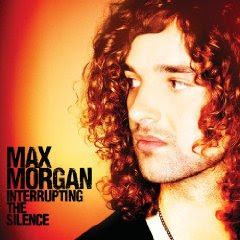 Max Morgan has already been heard all over American media outlets and his debut CD hasn't even been released yet. Placement on televisions shows such as Gray's Anatomy and Private Practice; on networks such as The NFL Network and ESPN; and on websites such as Seventeenmagazine.com, AOL Music and NYPost.com have made Morgan omnipresent of late. No one doubts Morgan has a good publicist, but a publicist just pries the door open. Morgan has garnered so much attention and press because he is an uncommonly talented and charismatic singer/songwriter/musician. The Liverpool, England native and Southern California resident brings a highly melodic and lyric vocal sound to a broad cross section of musical styles on his debut CD, Interrupting The Silence. Produced by Marc Tanner (Aerosmith, Madonna, The Calling), Interrupting The Silence is a bright comet currently circling the pop/rock scene; when it lands on March 31, 2009, the impact will be amazing.

Interrupting The Silence opens with the plaintive and melodic Loneliest Man In The World. As songs go this is up there in the Paul McCartney stratosphere of epic melodies. In another era this song would have been a multi-platinum single. Morgan has the sweet vocal essence of Chris Martin and the poise to deliver this song like an epitaph in waiting. Sold Out To The Scene brings a little 1980's pop/glam to the album in a crossover dance/rock package that is unforgettable before pulling on your heart strings with the gorgeously sad Wait For Me. Morgan follows up with the big time guitar rock anthem Suffer, which is a great deal more upbeat than the title may imply.

Morgan stomps and howls through hair rocker Ya Better Believe with all of the machismo and flamboyance that defined the more over-the-top front men of the 1980's. Having shown so many sides, Morgan settles next into the dramatic Nobody's Coming To My Rescue. Not since Freddie Mercury has any vocalist in Rock N Roll shown the breadth and stylistic vigor to tackle so many divergent styles and sounds and do them all successfully. Max Morgan has that kind of talent and appeal, and don't be surprised if this guy reaches the pinnacle of the rock world at some point in his career. Other highlights include Trouble, Don't Stop, the urgent rocker Fell and Prayer For No One.

Max Morgan is a rare, rare talent. It's impossible to say how things will pan out in the long run, but Morgan could be one of those once-in-a-generation talents who will transcend stardom to the point of attaining icon status. The musical and vocal talent is here, as is the charisma to reach out across the various voids that exist between artist and listener. Interrupting The Silence is a Wildy's World Certified Desert Island Disc, and is the sort of debut that can be very difficult to top. But something tells me Morgan can and will.

You can learn more about Max Morgan at http://www.maxmorgan.com/ or www.myspace.com/maxmorganband. Interrupting The Silence will be released on March 31, 2009. You can pre-order copies of the CD through Amazon.com.
Posted by Wildy at 5:20 AM