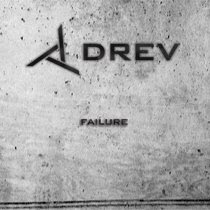 Drev is the mark of musical expression worn by Boston’s Jess Hewitt. Merging the divergent vines of Rock and Industrial together into an aggressive and virulent soundscape is the mission of Drev’s second album, Failure. Influences of Nine Inch Nails, Sister Machine Gun and Aphex Twin can be heard as subtleties are consumed in a swirling wall of sound.

Failure is sonically penetrating, particularly when played at appropriate volume. Unfortunately, there’s really nothing here that you haven’t heard before. Drawing heavily on his influences, Hewitt seems to have put little of himself into Failure. The listeners walks away learning little more about Hewitt than the fact that he’s a fan of the bands noted above as influences. Songs like Advance, Benign and Sirens make for interesting listens, but more often than not the tracks here just seem uninspired. Computers can do a great deal in the process of making music. It’s gotten to the point where almost anyone can make an Electronica or Industrial album if they are so inclined. Drev shows flashes of originality, but these are consumed in sounds and dynamics we’ve heard so many times they’ve become bland.

You can learn more about Drev at www.myspace.com/drev or http://www.drevmusic.com/, where you can order a copy of Failure directly from the artist.
Posted by Wildy at 5:00 AM

So, I do not actually consider this may have success.