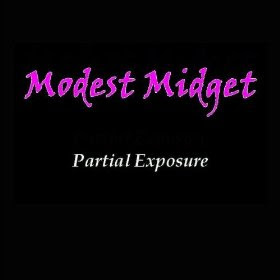 Based in The Netherlands, Modest Midget is the musical extension of Lionel Ziblat’s psyche into the world. A prolific composer, Ziblat writes Rock N Roll, Jazz and Classical style compositions for ensembles, film and his own projects. Born in Israel and raised in South America, Ziblat has a multitude of musical influences that run across national, cultural and ethnic lines. Add to this a melodic sense that would make Paul McCartney weep with joy and you have an extremely intriguing debut EP from Modest Midget entitled Partial Exposure.

Partial Exposure opens with Troubles In Heaven, carrying a minor key melody so infectious you won’t be able to shake it. Influences here range from the classic rock style guitar to the new wave keyboard flourishes, the almost Klezmer style violin fills and the quasi-classical orchestra transitions. This is a highly interesting song that will keep you interested from start to finish. Baby plays like a dark lullaby or night time soliloquy. Again, you won’t be able to shake the melody, presented here in a smooth and lush arrangement reminiscent of another era without surrendering its modern edge. Home I Seek employs a layered vocal harmony sound reminiscent of Brian Wilson’s compositions in a lushly layered, almost orchestral pop arrangement. Evolution closes out the EP and is my personal favorite here. Opening with a strongly Klezmer-flavored violin riff over a rhythm with vague South American roots, Modest Midget plows through a wonderfully melodic Progressive Rock arrangement. This is the most musically dynamic and brave choice on the EP and is worth the price of admission on its own.

Modest Midget, to judge from the four songs presented here, has the potential to be a musical dynamo. Casual fans will enjoy the contrast of mellow lush arrangements and high energy. Musicians will love the choices Ziblat makes in his writing, and his ability to brings styles and sounds together you might not have imagined. Partial Exposure is aptly named, but its more than enough to intrigue a whole lot of listeners and leave them asking for more. Well done.

You can learn more about Modest Midget at http://www.modestmidget.com/. You can purchase Partial Exposure as a download through iTunes, Napster or Amazon.com.
Posted by Wildy at 6:10 AM

I am so happy!!; I like this music myself very much and it is really wonderful to read such a well written and positive review. Great!