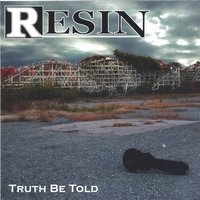 Massachussetts-based Residn are following in the footsteps of Boston icons Aerosmith, Godsmack and Staind. After barnstorming the Northeastern United States for the past couple of years, the band has perfected a sound that ranges from melodic pop/metal to thrash, covering all points in between. Resin’s debut CD, Truth Be Told shows off the charismatic vocal style of Ron Dallaire (sometimes compared to David Lee Roth for flamboyance) and the masterful guitar skills of Pat Pacheco on top of a killer rhythm section (Dave O’Brien – bass; Steve Smith – drums). Resin paces through heavy and light, poignant and prickly in one of the most wide-ranging and deliberate rock albums I’ve heard so far this year.

Truth Be Told opens with Song F, a great driving rock song with big guitar sound. Song F just sets the stage for Not For You. Not For You is a revelatory moment for guitarist Pat Pacheco as he shreds his way through rhythms and sounds that are practically patentable. No offense to Dallaire, but I got so caught up in Pacheco’s guitar on this song that I couldn’t even tell you what the song is about, and I listened to it several times. Resin takes a much more pop/rock turn on songs like Tomorrow, In The End and Done To Me, any of which could have commercial impact, but the gem of the album is Feel. On Feel, Resin achieve the perfect balance of heavy metal sound and hook-heavy pop rock. For A Reason is an interesting change up from Resin, opening as an acoustic piece that allows Dallaire to let the soul loose in his voice. Even once the heavy guitars come in this song retains its gentler qualities. Resin closes out the album in interesting fashion. The second to last song is the heavy-bordering-on-thrash Down The Line, breaking any sense of pop serenity that might have crept into Truth Be Told before launching into the Creed-esque anthem All My Life.

Resin seems equally comfortable with their heavy and melodic sides on Truth Be Told. Even the harder-edge songs on the album have a strong melodic pop sensibility, while even the softest of songs retains an edge. Dallaire isn’t my favorite singer, but he sure can sell a song, and Pacheco is just amazing on guitar. Rhythm sections often get overlooked, but they are the heart and soul of any band, and due of O’Brien and Smith is as good as they come. On the whole, Truth Be Told is a strong debut that should have broad commercial appeal. Resin manages to sound at times a bit like Metallica, Soundgarden or Creed, but in the end seem to have found an interesting and unique band persona that envelopes all of these myriad influences and turns them into something new. The future looks bright for Resin.

You can learn more about Resin at http://www.resinrocks.com/. You can purchase a copy of Truth Be Told at www.cdbaby.com/cd/resinrocks.
Posted by Wildy at 5:10 AM