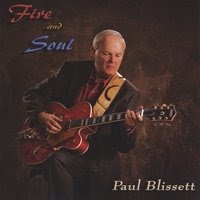 Paul Blissett had a rich set of musical influences from a young age. The Ottawa, Ontario, Canada guitarist grew up on a steady mix of Rock, Country, Blues, Pop, Jazz and Brit Rock from the first British Invasion. Blissett began playing out in Quebec and Ontario bars by the age of fifteen and has never stopped making music although other career paths have intervened at times. Over time, Blissett developed an appreciation for instrumental music and the supple role guitar can play in that specialized genre. In 2007, Blissett released Fire And Soul, a fireside exploration of instrumental guitar music.

Blissett displays two distinct tendencies on Fire And Soul. The first is a distinct love of swing-based Rock N Roll; the sort that was prevalent in the 1950’s and pre-Beatles 1960’s. Blissett himself is more than competent, though he lacks the distinctive style or presence that would raise him to the level of a Chet Atkins or Mark Knopfler-type guitar player. This is a man that most any band would be happy to have sitting in on lead guitar. Nevertheless, many of the choices on Fire And Soul seem to fall flat.

Blissett and band are at their best on some of the more rock oriented tunes such as Forty Miles Of Bad Road, Ramrod, Hard Times and Blueberry Hill. Even the blues-oriented songs (3:30 Blues, Honky Tonk) pack some punch, but much of the material comes off as low-key dinner or elevator music. One exception is the last track on the album, Piano Concerto #1. Blissett has a spring in his step throughout this song that is often lacking on Fire And Soul. That’s not to say this is a bad recording; Blissett is more than competent as a guitar player, and he has assembled a cast of first class musicians for this recordings, but the sound and approach here is too straight forward to set itself apart.

Paul Blissett is a talented and dedicated guitarist with a passion for instrumental music that comes through on Fire And Soul. It’s music for another generation, like the artists my Nana used to love on The Lawrence Welk Show. It features great technical guitar playing but displays little originality or pizzazz. Fire And Soul is not a strong commercial release, but it will definitely appeal to a niche demographic of music fans.

You can learn more about Paul Blissett at http://www.paulblissett.com/. You can purchase a copy of Fire And Soul at www.cdbaby.com/cd/paulblissett.
Posted by Wildy at 5:00 AM