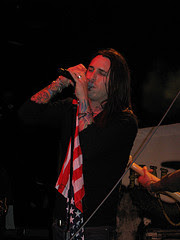 Today marks a couple of firsts for Wildy’s World! First off we’d like to introduce you to a correspondent who will review live shows for us from time to time. His nom de plume is rawdeadfish, and he’s an old college friend of mine who’s an expert in the realms of Punk and Hardcore, but is also the one responsible for introducing me to The Barenaked Ladies back when they were still touring in support of their “Yellow Tape”. He’ll be around from time to time picking up a show for us and sending in his thoughts for your reading pleasure. Also be sure to check out his website: http://www.rawdeadfish.com/.

Our first show review is the Burn Halo show at The Town Ballroom in Buffalo, New York from March 5, 2009. Here’s rawdeadfish’s thoughts:

I have to say that I was more impressed than expected by the March 5 performance of Burn Halo. I had never heard of the band or James Hart's previous band, 18 Visions, prior to being invited to this show. So I checked out their MySpace (http://www.myspace.com/burnhalo) and other online resources, and they sounded decent, but live, they were certainly more impressive. They had good stage presence and were right in the face of the audience.BH opened their 8 song set to a crowd of about 50 people with "Dead End Roads and Lost Highways" and got everyone bobbing their heads. They quickly broke into "Anejo", an upbeat, catchy, rock tune, that I'll have to say was my favorite. They went on to perform a few other numbers, talk with a crowd a bit, and dedicated the song "Our House" to the Buffalo Sabres, before finishing up with their single "Dirty Little Girl" and the pounding "Save Me".What I liked about Hart and the band was that they were not into gimmicks, or looks, they were just there to play and entertain. It was apparent too, because by the end of the show, they drew enough people from the front of the house to at least double the crowd.Burn Halo's self-titled debut album is due to arrive in stores on March 31, 2009. Check it out. Burn Halo will be touring throughout the spring. Check them out!

Finally a concert review that does this band justice! =)