Review: The Lighthouse And The Whaler - A Whisper, A Clamour 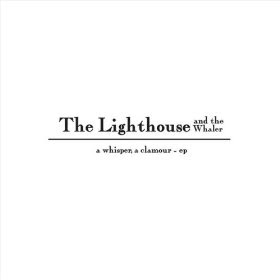 The Lighthouse And The Whaler started out as a day playing music in the park amongst three friends. Michael Lopresti, Evan Story and Aaron Smith went to a park in Cleveland, Ohio to jam. As they played, people stopped to listen and be enthralled. They knew they were on to something. Later adding Nick Wise, the course of The Lighthouse And The Whaler was set. In 2008, they released their debut EP, A Whisper, A Clamour. Full of ethereal and impressionistic sounds, A Whisper, A Clamor is refreshing and unusual.

Folk/Celtic instrumentation, angelic harmonies and a gentle touch are the fare of the day on A Whisper, A Clamour. The Field Song is a musical study in vibrant peace; the violin picks up where lead vocalist LoPresti leaves off as it dances with percussion and the harmony vocals in a bit of musical magic. The Letter is a slightly off-kilter love song with harmonies that sound like The Beach Boys in a fit of depression. The sound could be described as creepy/beautiful, like a musical Dali sketch. Honey, We All Had Wings sounds like a lullaby in reverse. It’s an invitation to live life that uses singing as its metaphor. Ethereal, beautiful and bizarre; it’s highly memorable. I Will Find You closes out the EP with a motivated yet repressed promise that is musical and yet transcends the barest branches of musicality.

The Lighthouse And The Whaler is unique. LoPresti isn’t perfect in pitch or tone, but fits perfectly into these songs. A Whisper, A Clamour is kind of like that. It’s not perfect, and it’s always entirely together, but there is a distinctive charm to the ethereal folk presented here. The Lighthouse And The Whaler aren’t likely to have wide commercial appeal, but the folks who get them will likely be rabid fans who stick with them until the ends of the earth. Check them out and see how they affect you.

You can learn more about The Lighthouse And The Whaler at http://www.thelighthouseandthewhaler.com/. You can download A Whisper, A Clamour from iTunes or Amazon.com.
Posted by Wildy at 5:00 AM

Labels: Salvador Dali, The Beach Boys, The Lighthouse And The Whaler