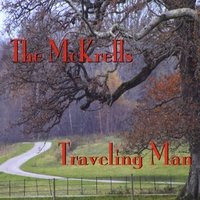 The McKrells are legends in Upstate New York, as well as being highly respected internationally in the Celtic music scene (Not to mention they are Wildy's World's Artist Of The Month for March of 2009). The band created a hybrid of Celtic and bluegrass sounds that earned them the appreciation of every crowd they played in, whether in a small pub in Ireland, their home base of The Parting Glass in Saratoga Springs, NY or even Carnegie Hall. The last few years have seen major changes in personnel and sound, but the heart of The McKrells; Kevin McKrell’s songwriting and voice, remains. Their latest CD, Traveling Man, was released in 2008 on Thorntree Music. It’s a change for longtime fans, but not necessarily an unwelcome one.

Traveling Man opens with the title track, a light and airy bit of Celtic influenced pop that will get your feet moving. This leads into the Bold Fenian Men, offered here as a low-key Celtic rocker. Kevin McKrell is in fine voice here, and harmonies from daughter Kate McKrell complete the aesthetic. McKrell offers up a primo performance on Shores Of America. Kevin McKrell’s voice has an iconic quality to it that is unforgettable, and Shores is the perfect opportunity to hear why.

Christmas Day is performed in the style of classic American Folk music by Kevin McKrell on guitar and vocals with harmonies from daughter Kate McKrell. It is a hopeful tune that strives for light at Christmas in darker times and is quite apropos amidst current events. One of two personal favorites on the disc is Two Peas In A Pod, a wonderful “silly little love song” that you’ll have on continuous replay. It’s a cute little mix-tape candidate that’s highly infectious and unforgettable. McKrell works in a glory days song on Ronnie’s Golden Mustang; if you’re a child of the late 1960’s or early 1970’s then this song will hit home (particularly with the Creedence Clearwater Revival, Grand Funk Railroad, John Lennon/Yoko and Lynyrd Skynyrd references), but every generation expresses these sentiments sooner or later.

My other personal favorite is The Motel de Marquis Lafayette. With clear roots in the Celtic and American Folk traditions, this is a virally infectious tune that will get stuck in your head for days, perhaps weeks. Traveling Man closes out with Tunnel Tigers in a bit of Celtic Funk/Rock (listen to the bass) that’s highly enjoyable.

There’s no doubt there’s been a big change in the sound of The McKrells. The strong Bluegrass element of their sound has departed, but it has turned the remaining McKrells back to their Celtic roots. The resultant CD, Traveling Man, is refreshing and immensely enjoyable album. As a writer and arranger, they don’t get much more talented than Kevin McKrell, and the rest of the band is top notch. Do yourself a favor and put this at the top of your listening list for St. Patrick’s Day. You won’t be disappointed.

You can learn more about Kevin McKrell and The McKrells at http://www.kmckrell.com/. You can purchase a copy of Traveling Man at www.cdbaby.com/cd/mckrells8.
Posted by Wildy at 5:20 AM