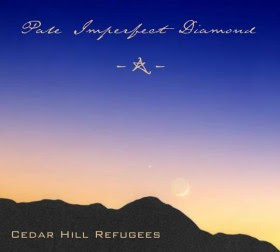 There's a lot of attention given to the Celtic roots of Appalachian music that grew into American Folk, Country and Bluegrass styles. Whitehouse Blues is an interesting construct, focusing on a previous period of economic uncertainty in the United States. History buffs will get a kick out of this one as it focuses on Presidents McKinley and Roosevelt. Keys To The Kingdom dwells upon the power of faith in dark times with strong imagery and a gorgeous vocal line. The title track is an original tune written in a traditional vein that is both ancient and modern at the same time. Stormalong is vibrant and reverent and Green Grows The Laurel is inspired, but Wildwood Flower is the star of the album. Angelic vocals by The Peasall Sisters and flawless instrumental execution will have you returning to this track again and again. Other highlights include Sailaway Ladies, Candle and Oh, Bury Me Not.

Cedar Hill Refugees marries traditional American Roots music and Uzbek instrumentation so perfectly you might not have noticed if I didn't tell you. The stylistic and sonic similarities on our roots speaks a great deal about the universality of human experience and expression. Pale Imperfect Diamond is as much an allegory for the cultures of both countries and their people as anything else. The music here is both reflective and instructive of our shared paths and our divergences. Pale Imperfect Diamond is bound to be one of the highlights of 2009.
Rating: 4 Stars (Out of 5)

You can learn more about Cedar Hill Refugees at www.myspace.com/cedarhillrefugees. Pale Imperfect Diamond will hit shelves May 19, 2009.
Posted by Wildy at 5:10 AM