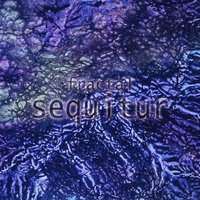 Fractal is an original Progressive Rock quartet based out of San Jose and the San Francisco Bay area of California, beginning as a trio in 2000 and expanding to their current lineup in 2004. Their second album, Sequitur, moves mostly away from the improvisational approach of its predecessor, Continuum, while containing some of the most stylish and artful Progressive Rock of the decade. Fans of King Crimson, Yes, Rush, Radiohead, Pink Floyd and even Dream Theater take note; Fractal may just be the second coming of Prog.
Sequitur opens with Ellipsis, a busy instrumental that reminds me of some of Rush's later instrumental work (perhaps a wayward cousin of the Where's My Thing trilogy). Aftermath is the band's response to the events of September 11, 2001 and the loss of personal and cultural innocence. At over nine minutes, Aftermath covers a lot of musical ground, churning through musical mourning, anger and fluctuations of fear before a soaring guitar solo lifts your hopes heavenward. Mantra: Eternal Spring Of Life was perhaps not intentionally written as an epilogue to Aftermath, but does seem to capture the resilience of human spirit springing back to health even after the tragedy and burgeoning recovery of Aftermath. Soft, legato guitar solos capture the fragile first steps of confidence inside the tougher shell formed by guitar, bass and drums.

Coriolis is one of only two pure improvisations on Sequitur, taking on an ethereal, Pete Namlook/Fax type feel, particularly when the keyboards are in full force. Coriolis is somber and serious and other-worldly. Fractal slips into an almost Radiohead-like transcendentalism on A Fraction Of One, imbuing a quiet sense of urgency on an almost supernatural soundscape. Pataphysics, the other improv on Sequitur is an angry and impetulant rage on musical canvas that neither progresses nor devolves, but simply sits as a sonic mass to be passed through on the way to Mauve and The Great Pain. Influenced by a Jimi Hendrix blues feel and Fripp/Belew guitar stylings, Fractal takes us on a 13/8 time odyssey of sound that is closer to improv than pure composition. The Monkey's Paw is a jumbled mass of musical styles that persists in its chaotic state rather than evolving into something new. Imagine if Rush jammed with Gibby Haynes and you might have an idea of how this one will go, except that it's a lot more pure Prog than you might expect.

The epic Churn opens with a classical style overture that leads into the three movements or parts. Part I is eerily reminiscent of classic Yes, with Steve Howe-style guitar chops highlighting a highly rhythmic piece. Part II goes more for a Floydian disposition with an incredibly funky bass line adding musical commentary to randomly dubbed voiceovers; all played against a varying sonic landscape of dark intent. Part III brings a sonic resolution of acoustic guitar and keys that plays like an outro to one of the classic Styx albums of the 1970's. Closing things out is Bellerophon, a bit of musical sleight of hand that is like aural vertigo compared to the rest of the album. Bellerophon is an electronic composition that the band describes as a non-sequitur.

Sequitur is far and away the most exciting and original pure Prog album of the decade. There is a vibrancy and sense of creativity running through the work of Fractal that you have to go back to the early days of Prog to duplicate. It's easy to picture Fractal sharing a stage with groups like Yes, Rush or King Crimson in their heyday. If you have an ear for Progressive Rock then this album is definitely for you. if you're not familiar with Prog but love classical music, musical with unusual time structures or even some of the more experimental electronica then you would do well to give Sequitur a listen. Fractal got it right.

You can learn more about Fractal at http://www.fractal-continuum.com/ or www.myspace.com/fractalcontinuum. You can purchase a copy of Sequitur at www.cdbaby.com/cd/fractal3.
Posted by Wildy at 5:20 AM