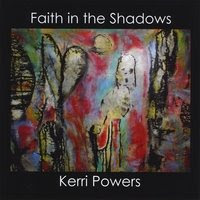 Kerri Powers’ career is a study in promise and shadow. One of the more distinctive voices in Americana/Alt-Country (think Bonnie Raitt crossed with Tina Turner). Powers’ rise was nearly derailed a few years back by a dishonorable record distributor. Taking some time off to focus on her family, Powers made her way back to writing and performing in 2005. Teaming up with producer and friend Crit Harmon (Martin Sexton, Mary Gauthier, Lori McKenna), Powers found her voice again amid a set of musical short stories she co-wrote with Harmon. The seeds of Powers latest CD, Faith In The Shadows were planted.

Faith In The Shadows opens with Do You Hear My Footsteps?, a wonderfully dark yet catchy tune. Powers’ voice is a substantial quality in her music, hitting you with a physical force and demanding to be heard. Powers has a smoky, rough edge to her sound that is distinctive and yet has a lyric, melodic quality that is darkly beautiful. On Trying To Make My Way To You, Powers edges into a 1960’s film noir style of story-song, complete with wailing guitars Nobody Minds My Drinking is a modern country classic in the making. Powers and Harmon have managed to capture in five minutes a perfect portrait of one person in their pain and need that is more powerful than any photo you could produce. Powers digs into a real bluesy sound on Low Down Low. On this song in particular she reminds me significantly of Joan Osborne in her pre-Relish days. My favorite track on the CD is Tallulah Send A Car For Me, a delicious acoustic blues vignette that had me hitting repeat time and time again. Other highlights include Magdalene and Fireworks And Cheap Repairs.

You can learn more about Kerri Powers at http://www.faithintheshadows.com/. Songs from Faith In Shadows will be featured on FX’s Rescue Me. You can purchase Faith In The Shadows at www.cdbaby.com/cd/kerrip.
Posted by Wildy at 5:10 AM