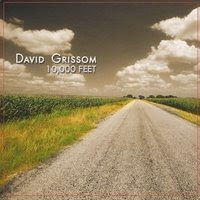 David Grissom is something of a legend within the music industry, but the casual music fan won't know his name in spite of hearing him play many times over. As a session and touring guitarist, Grissom has worked with the likes of The Dixie Chicks, John Mellencamp, Joe Ely, Buddy Guy, Storyville and The Allman Brothers. His songs have been recorded by Tricia Yearwood, John Mayall, Montgomery Gentry, Webb Wilder and more. We reviewed Grissom's debut album, Loud Music last year. Now he's back with 10,000 Feet, mixing Stevie Ray Vaughan style blues and AOR rock with good old fashioned Texas songwriting for one of the most accomplished classic rock albums of the year, thus far.

10,000 Feet opens with Keep A-Rollin' On, with Grissom channeling Gary Richrath on guitar in an energetic guitar rocker. 10,000 Feet is a classic song; strong vocals highlight this highly melodic song. Take Me Back To Texas is a love song for that state, and Butterbean Friday is a tribute to the sort of Blues Stevie Ray Vaughan made famous. Good Day For The Blues is bound to be a concert favorite, complete with Bic or iPhone lighting scheme. Three songs in particular stand out from the rest as exceptional. True Love Don't Work That Way is the strongest entry, a driving blues/rock hybrid that you won't be able to get out of your head. Jet Trails In The Sky may be the deepest track here; an allegory for unrequited love that is poetic and reverential. My other favorite is Sqwawk. Built on Blues riffs, Sqwawk is set against a 1970's anti-punk arrangement that is intriguing. This is what it might sound like if Kim Mitchell ever jammed with Eric Clapton.

Grissom is a more than capable vocalist, but his guitar playing is the true standout on 10,000 Feet. This is a highly enjoyable album that just doesn't quit. Grissom hits you with great song after great song without sounding formulaic or tired. 10,000 Feet is a must-hear CD.
Rating: 4 Stars (Out of 5)

You can learn more about David Grissom at www.myspace.com/davidgrissommusic. You can purchase a copy of 10,000 Feet at www.cdbaby.com/cd/davidgrissom2.
Posted by Wildy at 5:10 AM

I found a lot of effective data above!