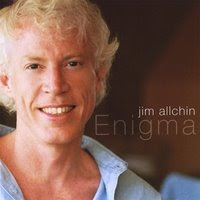 If it weren't for a serious illness you might never have heard of Jim Allchin unless you were a true techno-geek. Allchin helped run the Platforms & Services Division of Microsoft until retiring in 2007. Allchin was recognized by none other than Bill Gates as "a brilliant technologist, visionary and a strong leader". Staring mortality in the eye, Allchin didn't flinch. Like so many great achievers facing adversity he simply re-prioritized his life and moved forward. A trip to Montenegro and Croatia turned Allchin on to the pop music of that region, and the passion for music he'd experienced the first time he listened to Jimi Hendrix as a youth, and soon he was playing and writing up a storm. Recording almost exclusively on his own, Allchin went on to create Enigma, his 12-song debut album that was just released on March 17th.

Jim Allchin kicks off Enigma with Enigma Machine, a stylistic and driven guitar instrumental that is a musical throwing down of the gauntlets to the listener. You are hereby noted that this isn't just a vanity project, but a serious effort at musical creation that is going to challenge you. Allchin doesn't have the greatest singing voice, but he uses its best effect on Enigma. Take A Chance On Love is an easy-feeling pop song that's a great prologue for I'm About To Fall. I'm About To Fall is a sleepy and succinct tune about the inevitability of love. Let's Play is a true highlight. Allchin makes the most of a song that could be a true pop hit in the right hands.
Allchin takes us to the islands on She's In Love With Me, a peppy and danceable pop song with real legs to it. I was particularly impressed with I'm Your Man. Allchin serves up some deliciously lyric guitar work here, embellished with vocal harmonies built in classic rock triads. I'm Your Man is a sonic treat. The true standout of Enigma is the Roadhouse Rock N Blues of Rockin' Chair. Allchin stays with the Blues on the Stevie Ray Vaughan styled Killer Shuffle. The album closes out back in the roadhouse with Kick It, an agressive Southern Rock/Blues hybrid that allows Allchin to show off stylistically on his way out the door.

Alright, I'll admit it, I was a bit cynical when this one first came across my desk. Celebrities, politicians, athletes and captains of industry all want to be musicians, and most have the resources to do it even if no one's listening. There are some out there with real talent, but these are few and far between. Jim Allchin is already an accomplished guitarist and performer, and a better than average songwriter. I am also convinced that if you listen to this disc and find flaw, when you hear the next one those flaws will be greatly diminished. Allchin is not the sort of man to stand still. He's always reaching and stretching and perfecting whatever he applies to himself. Enigma is a great start, and if his past is any indication, whatever comes next will be even better by leaps and bounds.

You can learn more about Jim Allchin at http://www.jimallchin.com/. You can purchase a copy of Enigma at www.cdbaby.com/cd/allchin.
Posted by Wildy at 5:20 AM