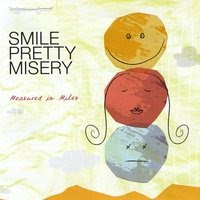 Baldwin, New York’s Smile Pretty Misery has been spreading their blend of Jazz, Pop and Rock all over Long Island for the last two-and-a-half years. With a wonderfully smooth mix of styles and sounds, stellar songwriting and smooth as silk vocalist Jaymes Welsh. In 2008, Smile Pretty Misery released Measured In Miles. Let’s check it out.

Measured In Miles opens with (You Know) You Gotta Love Her, a glorious pop/jazz hybrid that’s pure gold. Vocalist Jaymes Welsh is an old school crooner although there are a couple of notes here that are way out of his regular range. This is a doozy of a leadoff song, building significant expectations for the rest of the EP. For the most part, Smile Pretty Misery delivers. Will But No Way is a fairly typical alt-rock song recorded with minimalist instrumentation/effects. The melody is quite memorable and the lyrics show real thought and depth. Blood Red Ink is also highly memorable, building simultaneously in sound, intensity and emotion before deflating in self-realization at the end of each chorus.

June To September is based on an infectious melody, playing off Welsh’s lyric voice against jangly guitars and moderately aggressive percussion. This is the most sonically striking song on the album and the one most likely to have distinct commercial impact. Snake Oil Man is a pleasant listen, and Happy New Year closes out the set with a mellow benediction of personal change.

Smile Pretty Misery is a distinctive band with a unique sound. It’s not rock or pop, exactly, although they touch on those genres. Think more classic singer/songwriter style with a touch of old school vocalist (think Johnny Mercer crossed with Josh Groban.) In spite of the mellow, slightly repressed arrangements (ala Norah Jones), Smile Pretty Misery brings energy and vitality to every note. Measured In Miles gets high marks as a very enjoyable introduction to Smile Pretty Misery. Don’t miss this one.