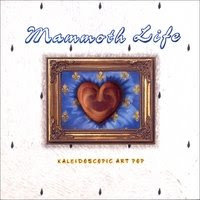 Chamber Pop Quintet (and occasionally sextet) Mammoth Life hails from Lawrence, Kansas, where among the cornfields, under the hot Kansas sun they've been distilling a brand of alt-pop sweeter than corn bread and more powerful than ethanol. Kaleidoscopic Art Pop is the name of their debut album, and an apt description for the mellifluous music creates as easily as they breathe. Producer and bandleader founded Mammoth Life in 2004 with keyboardist/vocalist Elizabeth Mead. The band is rounded out with lead vocalist Bobby Sauder, Melicent King (violin, synths) and Rachel Mulford (drums).

Mammoth Life works because of strong songwriting and a sense of joy that comes across in their music. Its not that the songs are particularly happy or bouncy, but there's a real sense that Mammoth Life is having a ball doing what they're doing, and it rubs off on the listener. Bicycle Rider is frenetic, chaotic and tuneful with great harmonies and an almost classical song structure highlighted with quirky Folk/Pop instrumentation. Convoluted I starts out as a Gypsy/Klezmer hybrid led by the violin before resolving into a quirky pop confection. These are the sort of contradictions you'll encounter when listening to Mammoth Life, although they sound less like contradictions than happily coexisting musical improbabilities. At Once is a prime example. After several listens the only honest description I can come up with is that it’s bizarre, yet strangely catchy. You'll have to form your own opinion on this one, but the intrigue factor is enough on its own to keep you coming back.

Word Salad plays like a pop symphony masquerading as an alternative folk song, which serves as a warm-up for First Semester Of College. This may be the most inventive song on the album, opening as a Baroque harpsichord composition that devolves into what I can only describe as highly rhythmic toddler punk. Unburden Your Heart To Me is also highly unique, playing like a Medieval musical play. The instrumentation is a bit surreal but the song is highly entertaining. The biggest surprise on Kaleidoscopic Art Pop is Our Prayer, a classic mixolydian secular hymn played on what sounds like Organ and Sanctus Bells. Our Prayer is a beautiful piece of musical expression.

Mammoth Life looks like they might have just stepped out of the late 1960's. The creativity and ability to look at musical creation from outside the box is refreshing and enervating. Not everyone is going to get this music. It's definitely not the status quo, but it might just be the most original sound you're going to find this year. Kaleidoscopic Art Pop contains a couple of songs that just don't gel, but on the whole it’s an outstanding effort.

You can learn more about Mammoth Life at http://www.mammothlife.net/ or www.myspace.com/officialmammothlife. You can purchase a copy of Kaleidoscopic Art Pop at www.cdbaby.com/cd/mammothlife.
Posted by Wildy at 5:20 AM