Review: Mouse Kills Tiger - Music Is The Weapon Of The Children 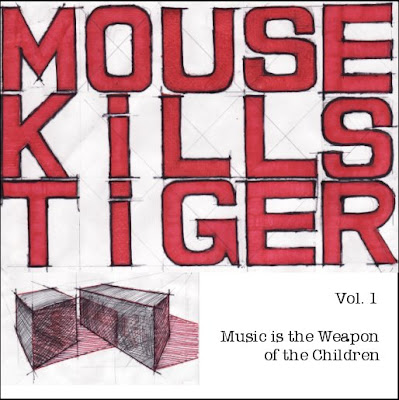 Mouse Kills Tiger is a Los Angeles based dramatic alt/goth rock ensemble with a decided proclivity for depressive, or at the very least, repressive musical melodrama. Their debut EP, Music Is The Weapon Of The Children, follows a path that Robert Smith would pay tribute to. With recording help from Barak Shpiez of Beware Fashionable Women, Mouse Kills Tiger has released their musical wares upon the world.

Music Is The Weapon Of Children opens with She's Hungry, a highly repetitive piece that builds in intensity but never reaches a climax before it sort of fades away. I See Mephistopheles is a surreal, sonic overload. Minor keys bend into other minor keys, leaving the listener without any real sense of aural resolution. Chasing Foxes didn't leave much of a distinct impression either way, whereas Racer Ready was a long, drawn out musical exposition that again, never seemed to reach a plateau or a sense of sonic completion. Music Is The Weapon Of The Children had a more compositional sense to it but still fails to really connect with the listener.

Music Is The Weapon Of The Children is the sort of vaguely disturbing, depressive rock music that The Cure or The Smiths would have made had they not had their inherent pop sensibilities. It is somewhat impressive as a musical exercise in tenacity, but doesn't reward the listener for traveling through such dark musical lands with even one bit of sonic resolution. Mouse Kills Tiger will find a demographic that enjoys this music, but its not highly marketable. For my own part I found it a difficult listen but not without artistic merit.

You can learn more about Mouse Kills Tiger at www.myspace.com/mousekillstiger. You can download Music Is The Weapon Of The Children for free here.
Posted by Wildy at 5:10 AM