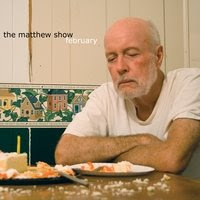 The Matthew Show is the musical alter-ego of Songwriter/Producer Matthew Broyles. Drawing on the misgivings of the first generation in US history to not do as well or better than their parents, Broyles explores the lives of five adults on the cusp of middle age in spoken word and song, delineating the sometimes divergent paths of dreams and reality that have led them to the here and now. The end result is February, a moving and poignant musical experience that is part album and part documentary.

I have to admit, February is one of the more original concept albums I’ve come across. Styx fans might recognize the format from Movement For The Common Man (Styx I), interspersing interviews with music; each illuminating the other. February is about walking the line between dignity and despair; the human tendencies to give in to the latter yet retain hope for the former. Matthew Broyles displays a wickedly incisive sense of humor as the occasional relief or illumination for a murky topic. Half The Man opens the musical portion of February; a tongue-in-cheek bit of self-realization about the loss of dreams. Innocence is a brilliant song that shows some real Pink Floyd influence in the construction.

My personal favorite is Impotent Rage. The song is again, slightly tongue-in-cheek, but deals with the sort of general, undirected and unaccounted for anger that seethes in cities and occasionally ends up on the news with neighbors saying, “he was always such a nice, quiet man…”. February is a snappy little song about the depths of despair, the archetype being the coldest, snowiest month of the winter. Hope seeps through the pores of this song in the abstract, much the way that we know logically that by February we’ve turned the corner on winter and more light is coming, but it’s still cold and snowy and bleak in the moment. The Last Words Of Sigmund Freud is the waltz you knew it had to be, dealing with the tendency to live in dreams what we have lost in reality.

The World Of One Percenters is brilliant songwriting about the human need to be seen. Not seen in the sense of the narcissistic tendencies of the city, but in a human need for confirmation. This is particularly true in a large city like New York, (where the concept album is “based”). In a large city it is easy to lose your own identity when everyone is packed so close together, particularly if you feel like you have no control over your own fate. Connections to other people help to maintain your senses of self and reality in such a place. The World Of One Percenters represents this perfectly in song.

The last song offered here is The Skyline Hotel, a wonderful look at how close the haves and have-nots come in a large city. Often times a hotel may sit on the outer edge of a poor neighborhood in a city. Tourists who stay in the hotel may never know they are staying right on the edge of No Man’s Land, but the residents of that neighborhood see them come and go every day. This song is about watching the privileged come and go right on your doorstep and feeling powerless to escape your surroundings. It is a powerful look at the sociology of neighborhoods and social strata in a large city.

The Matthew Show’s February is an amazing album. This isn’t stuff you’ll hear on the radio, and it’s not written for mass commercial consumption, but it’s some of the most intelligent and powerful rock songwriting you’ll find. The interview snippets help to illuminate the songs with personal viewpoints and experiences. I highly recommend this recording, but be prepared to give some real time listening to February. If you don’t give this one your full attention you won’t get it.

You can learn more about The Matthew Show at http://www.thematthewshow.com/. You can purchase a copy of February at www.cdbaby.com/cd/mshow.
Posted by Wildy at 5:20 AM

Wonderful read about "The Matthew Show". Isn't it good to know that creativity is alive and doing well? YES to Matthew Broyles and his program.

"February is about walking the line between dignity and despair; the human tendencies to give in to the latter yet retain hope for the former. Matthew Broyles displays a wickedly incisive sense of humor as the occasional relief or illumination for a murky topic."