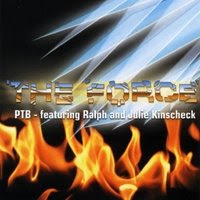 PTB is the musical youth ministry practiced by Julie & Ralph Kinscheck. Formed in 1997 almost by accident, PTB has been fueling youth ministry events ever since. In 2006, PTB released their first album, The Force. The songs on The Force strive to be lyrically positive representations of Faith in music.
The Force opens with S.P.Y. Kidz (Spiritual Powerful Youth), which comes across as music written specifically for a Christian Youth Conference setting. It’s music meant to create an atmosphere and therefore comes across as gimmicky. It’s an appropriate bellweather for the album, which is obviously targeted toward youth with hip-hop themes, raps and pop/rock anthems for modern, feel-good worship services. It’s Christian bubblegum pop for teenage masses and comes off as cunningly targeted and manipulative like an infomercial rather than an honest projection of ideas, beliefs or faith.

The distinct differences in approach between Kinscheck’s work as part of PTB as opposed to her solo work or with Faith In Action stands out like a sore thumb. This music designed to impress a message without thought while the listener is caught up in the fervor of a mass experience. If it were being done in the name of a less mainstream religion it would be referred to as programming rather than worship music. It forsakes thought in the name of the euphoria of group psychology and assimilation, making it come across more like a series of advertising jingles than heartfelt compositions.

You can learn more about PTB at http://www.ptbtheforce.com/, where you can purchase a copy of The Force in the artist’s store.
Posted by Wildy at 5:10 AM

I guess Wildy didn't like this one much- Actually the songs were all written as theme songs for preteen camps all named after popular movies and sayings. Hence maybe the jingle feel to him. That's pretty harsh to call it manipulative and mindless pop at the same time- that must have taken some hard work on our part!

Peace in Him,
PTB