Review: Son Of The Sun - Before And After [EP] 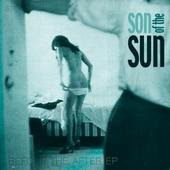 Son Of The Sun may be the hottest new band in Upstate New York. The Buffalo quintet mixes the ethereal languor of Radiohead with the orchestral complexity of The Moody Blues and the Country/Rock spirit of Blue Rodeo on their EP, Before And After. The EP, a preview of their full length CD The Happy Loss (due Spring, 2009) is revelatory in the depth and breadth of styles and musical choices Son Of The Sun braves. Guitarist/vocalist Zak Ward and multi-instrumentalist Joseph Stocker create a moving target of musical styles across the six songs presented here. Their job is made easier Jeremy Franklin (guitar), Steve Matthews (bass) and Brandon Delmont (drums), who provide an incredibly tight and musical base.

How Can It Be and Big Record Breaker had me thinking of The Moody Blues circa Days Of Future Passed. Singer Ward has a lyric vocal style that first perfectly with these lush, almost ethereal arrangements. Listen Darkly has a straight up Americana feel to it with some Roy Orbison-style guitar embellishments. Spanning Time is something of a sonic watercolor, filling your ears with sounds and rhythms than transcend construction or intent. Son Of The Sun takes a wonderful turn toward the country/rock landscape with punker verve on Stay The Same (my favorite song on the CD). Son Of The Sun winds things down with Tell Me, a sprawling 1950’s style ballad that has a highly memorable melody. My only complaint about the EP at all is that the vocals on the last song were mixed way too low.

Son Of The Sun presents a quandary for classification. It’s not so much that they are all over the map, but that they’ve re-written the map to suit their own musical purposes. Before And After covers everything from symphonic rock to alt-country, even showing some flashes of punk energy on Stay The Same. What do you say about a band that does everything and does it well? Bring on the full length album…

You can learn more about Son Of The Sun at www.myspace.com/sonofthesunmusic, where you can purchase a copy of Before And After [EP] on either CD or vinyl via PayPal. You can also get it digitally through iTunes.
Posted by Wildy at 6:03 AM