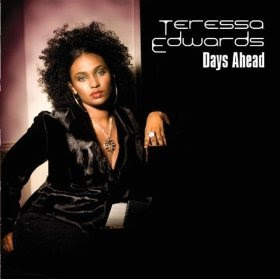 Teressa Edwards cut her musical teeth singing in gospel choirs. By the age of 16 she was singing in a professional choir and traveling all over the Caribbean. The sudden, tragic death of her mother put a stop to the non-stop touring, but music remained as a source of comfort and a means of creative catharsis. Edwards’ energies were put into writing and recording her debut album, Days Ahead.

Teressa Edwards has an interesting and entertaining voice; there’s a rough edge built into the center of her sound that keeps her voice from being pretty, per se, but its memorable and unique enough to catch and hold your attention. Such a sound builds an expectation in the listener that the material that follows might follow a similarly atypical path, but it is not to be on Days Ahead. Edwards sticks to pretty standard R&B/Hip-Hop formulae, but fails to really distinguish herself from the vast pool of other singers/performers in that pool. Cookie-cutter dance songs are the order of the day (How You Want It, Honey Trap, Hypnotised, Crazy Baby), with some Hip-Hop (Don’t Be A Fool) and even Latin-flavored Hip-Hop (Dance With Me) thrown in. What is absent is even a single song that lets Edwards really open up her voice and show you’re the powerful, gorgeous sound she is capable of. The closest Edwards comes is I Love You, a decent R&B ballad that is unfortunately introduced as if its being played on the radio.

Edwards is flat out better than the material on Days Ahead. The music itself is average and is, quite frankly, carried by Edwards’ voice. Days Ahead is worth hearing for flashes of what Edwards possesses vocally, but even that is giving short shrift to Teressa Edwards. She’s better than what you’ll hear here.

You can learn more about Teressa Edwards at www.myspace.com/teressaedwardsdebut or http://www.teressaonline.com/. You can purchase Days Ahead as a download through either Amazon.com or iTunes.
Posted by Wildy at 5:00 AM