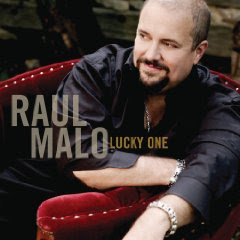 One might guess Raul Malo was raised on the classic music of Elvis Presley, Tom Jones, Roy Orbison, Jim Reeves and other greats of the golden eras of Rock and Country. On his latest CD, Lucky One, Malo pays vocal and stylistic tribute to that bygone era, moving through the sounds of that time like a musical chameleon. On the first three tracks alone Malo channels Tom Jones (Lucky One), Elvis Presley (Moonlight Kiss) and Roy Orbison (Something Tells Me). Crying For You is perhaps the biggest moment here, sounding like something Sun Studios and the country side of Nashville might have gone to war over at one time. Malo has a classic sound that would have fit in easily anywhere from the late 1940's to the 1960's heydays of Las Vegas. While looking decidedly modern, Malo has captured a sound and style here that becomes stale in the hands of many artists of this generation. Few have the charisma and showmanship to bring this type of music the way Elvis or Tom Jones did, much less in the fashion of Sinatra, Dean Martin, Sammy Davis Jr. or other contemporaries of The Rat Pack.

It's a little too early to tell, but Raul Malo might just find his name mentioned in those circles one day. He has the voice and the presence to be there. If you're a fan of great vocal music in general, or of 1950's and 1960's pop vocal music in particular then you need to check out Lucky One. You won't regret it.

You can learn more about Raul Malo at http://www.raulmalo.com/ or www.myspace.com/raulmalo. You can purchase a copy of Lucky One at Amazon.com.
Posted by Wildy at 5:00 AM