Review: Melting Point - Get On The Bus 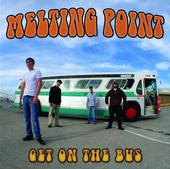 Melting Point - Get On The Bus
2009, Banana Man Records

Berkeley, California has been the home bass and hiding place of Melting Point since 2005. While in relative seclusion the band has been cooking up a mix of classic sounds and downtown rounds to try to add something new to the rock n roll stew. The result is their debut CD, Get On The Bus, a mix of Garage and Noise with a Seattle poise and a lot of testosterone thrown in.

Melting Point gets right to the cusp on Get On The Bus but never quite gets gaseous. A steady mix of Garage, Noize and Psychedelia is punctuated with the occasional Reggae jam or Grunge outpouring as a means to purvey the testosterone-laden lyrics Melting Point thrives on. More American Pie than American Idol, the quartet runs through thirteen decent to good tracks with no real, "Hey, who is THAT?" moment. The closest thing on the disc is Rainbow Tincan, which sounds a bit like heavier Jethro Tull. It's the most coherent and directional songwriting on the album and you could actually here this one getting played on the radio. The other material is interesting, from the Pearl Jam/Soundgarden hybrid Ishmael to the pure teenage male chutzpah of Core and Get On The Bus. Melting Point is great party music, particularly if its a frat party, but Get On The Bus is too steeped in its influences to really get original. There’s a definite demographic for Get On The Bus, but its not a large slice of the commercial pie.

You can learn more about Melting Point at www.myspace.com/meltingpointband or http://www.meltingpointband.com/, where you can purchase a copy of Get On The Bus.
Posted by Wildy at 5:00 AM