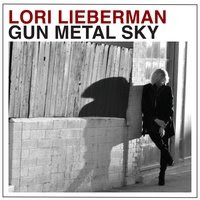 Lori Lieberman has seen the highs and lows of the musical industry. Her debut album, Lori Lieberman, was released on Capitol Records in 1972. It featured a song developed from a poem Lieberman wrote about Don McLean that was moderately successful for Lieberman, but which would become a major hit for Roberta Flack a few years later. Killing Me Softly (With His Song) still gets regular play on Adult Contemporary stations throughout North America. Lieberman release five albums in the 1970’s (three for Capitol), then took a break to have a family in the 1980s. Making her way back into the music scene as an independent artist in the mid-1990’s, Lieberman has gone on to record 6 additional albums with Pope Music and now Drive On Records. Her latest, Gun Metal Sky, may be her finest to date.

Gun Metal Sky opens with Early Wednesday Morning, a vibrant and poignant bit of musical autobiography that will stick with you. A great country-tinged folk arrangement is accompanied by powerful lyrics and a memorable melody line. Lori Lieberman has a wonderfully textured voice that is straight to the point with intriguing layers in the middle. Another Galaxy is an allegory for the concept that sometimes cowardice is the bravest step. Gun Metal Sky is put forth here in a wonderfully textured semi-orchestral arrangement that will definitely grab your ears attention. The highlight of the album, perhaps even a bit of a diva moment is When You Were Mine. Lieberman's cover of The Beatles Bus Stop also stands out. Lieberman has an enjoyable visit, but in song after song its the arrangement and musicianship that really stands out on Gun Metal Sky. Other highlights include the Tori Amos-ish More Than This, Killing Me Softly and Takes Courage.

Lori Lieberman puts forth powerful interpretations and distinctive arrangements on Gun Metal Sky. With a voice that will draw attention without being over the top, Lieberman draws listeners in slowly. It took a couple of listens to really get into this CD, but the effort was well worth it.

You can learn more about Lori Lieberman at http://www.lorilieberman.com/. You can purchase a copy of Gun Metal Sky at www.cdbaby.com/cd/lorilieberman6.
Posted by Wildy at 5:51 AM