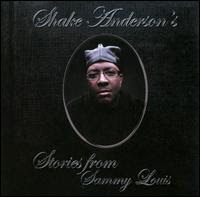 If you’re ready for some classic mid-western R&B and Soul, then check out Sam “Shake” Anderson’s Stories From Sammie Lewis. Marching to a beat somewhere between Marvin Gaye and Al Green, Sam “Shake” Anderson lays down twelve classic sounding tracks on the CD The cover of Set It Off is sublime, and Anderson will lull you into reverie with songs like Don’t Come Roun’ Here No Mo’, Sold Me Down The River and The Only Game In Town. Anderson possesses a sugar-smooth voice, but finds the Rock N Soul sound when called for. Be sure to check out Shine On, That Won’t Mean and We May Never Get Out Of Here, but there really isn’t a weak track on the disc.

You can learn more about Sam “Shake” Anderson at www.myspace.com/samshakeanderson or http://www.shakeanderson.com/, where you can purchase a copy of Stories From Sammy Louis
Posted by Wildy at 5:00 AM