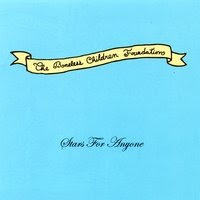 Stars For Anyone opens with the title track, an upbeat garage rockers with a bit of pop mystique. The Boneless Children Foundation remind me significantly of the early days of The Figgs (when they were a quartet). Carl Sagan is an amusing and befuddling work of rough edged alt-rock. No pithy nuances here, just a vague inference between the number of the stars in the universe, the number of cars on the freeway and love. Relax is a fun song that has a bit of the rock anthem aura to it, while People Care About Their Cars descends into good-natured, silly chaos. Other highlights include My Little Book, Get Up, King and Will Never Come True.

The Boneless Children Foundation offers an unusual mix of raw, unvarnished rock and flashes of distinct musicality. The sound is rough, closer to what you might hear live than to your usual over-produced studio recording, but Stars For Anyone charms with its raw energy and enthusiasm. Call it post-punk alternative, but don’t get too attached to the label. There’s flashes of Weezer in the sense of humor found here. It’s an enjoyable listen.

You can learn more about The Boneless Children Foundation at http://www.bonelesschildren.com/. You can purchase a copy of Stars For Anyone at www.cdbaby.com/cd/bonelesschildren2.
Posted by Wildy at 5:30 AM

Labels: Carl Sagan, The Figgs, The Police, The Unicorns, The Who