Review: Gary Stuart King & Amigos - Life Of Its Own 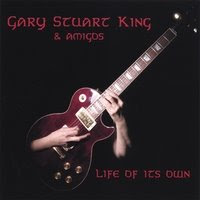 Guitar maestro Gary Stuart King lets loose with some ripping Progressive and Classic rock solo guitar work on Life Of Its Own. Influences from Eric Johnson to Yngwie J. Malmsteen abound, with occasional bows to Jeff Beck, Joe Satriani and even Steve Howe. King finds a serious groove on songs such as Schmack, Ruf Tup and Little Dreamers, throwing around riffs like nobody's business. King even shows a softer, melodic side on Spring Rituals and Song For Sheila, although the latter breaks out into some pretty serious lick trading in the middle. Beyond X, the lead track, is probably my favorite, with its urgent, post-jazz fusion and sensibility and mellotron accents.

Life Of Its Own is one of the better rock instrumental albums I've heard. Gary Stuart King can play guitar with the best of them, and doesn't waste your time with endless runs when he can use his prodigious skills to construct, destruct or accent inherent melody line of each composition. Of course, he does get some pretty mean runs in as well. This one is a must for novice guitar rockers. This is how you do it well.

You can learn more about Gary Stuart King at www.myspace.com/garystuartking. You can purchase a copy of Life Of Its Own at www.cdbaby.com/cd/garystuartking.
Posted by Wildy at 5:10 AM

Really nice blend of styles, all urgent in their delivery.