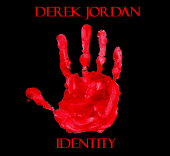 Derek Jordan comes to Los Angeles from Pittsburgh by way of Chicago. His debut CD, Identify, is entirely self-produced and self-funded. Starting out with a classic rock background and a modern rock education, Jordan exudes the confidence of a rock n roll star while writing about the ins and outs of the human psyche.

Identify starts out on a promising but familiar note. The hook underlying Goodbye Jupiter is practically the same rockabilly hook that runs throughout Stray Cat Strut. To open with something so blatantly familiar either calls for a formula that resides in offering familiar sounds and then taking them new places or just totally blowing the lid off the album. Jordan does neither, settling for a comfortable, vaguely angry white male blend of rock n roll. Jordan's voice is good but isn't particularly discernable from a host of other rock vocalists. His guitar playing is technically proficient but doesn't seem emotionally driven or profound. The songwriting is fairly standard issue rock material with one exception. Hold On Tight could be a moderate hit in the right market, but more importantly is very accessible and listenable with something like a pop sensibility to it. Otherwise, songs like Vaccine, War With Your Love and Living For Two all sound too much like stuff that comes and goes on the radio all the time.

Jordan shows flashes of brilliance with the guitar, but just doesn't seem to find the inspiration on Identify to really sell himself or the material. He's a strong performer with good skills, but just doesn't display the dynamic catalyst to make you seek him out.

You can learn more about Derek Jordan at www.myspace.com/derekjordanrock or http://www.derekjordanmusic.com/, where you can purchase a copy of Identify. You can also download the album from iTunes.
Posted by Wildy at 5:00 AM