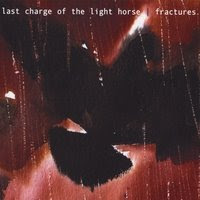 Last Charge Of The Light Horse is no stranger to praise. The New York trio's debut CD, 2005's Getaway Car was named Independent Album of the Year for 2005 by The Daily Vault. Their song The Second Time Around was even featured on the PBS show Roadtrip Nation. Not afraid of the sophomore slump, Last Charge Of The Light Horse barreled into 2008 with Fractures, a Folk/Americana celebration of life's trials and tribulations. Vocalist/guitarist Jean-Paul Vest, Bassist AJ Riegger and drummer Jimmy Romanelli have captured lightning in a bottle the second time around.

Vest is a true wordsmith, creating aural oil paintings in music and lyric. The depth and movement of the music is surprising given that we're talking about a bare-bones trio. Fractures opens with The New Year, a wonderfully dark celebration of the turning of time with highly melodic and ethereal effects. This song is very catchy but in a quiet way that will surprise you. Face To Face has a Dire Straits feel to it. Vest has a similar vocal sound to Knopfler at times, and his guitar style goes there at times, although he never quite captures the level of subtlety Knopfler is capable of (who does?). Something Out Of Nothing is a poignant vignette that sounds like it might have been born of jam session between Dire Straits and Toad The Wet Sprocket.

One of my favorite tracks here, sprinkled with wry humor, is A New Expression. This is a song about being in the doghouse that will hit home for those in the know. Even if you're not it's a great song. The Switch Is On is a great rhythmic rock song, expressing change both in the lyrics and in the movement evident in the musical arrangement. Time is a great Americana/Rock song. Fans of The Cash Brothers or Skydiggers will love this tune. The last three songs on the CD are perhaps the best songwriting of the bunch. These aren't flashy songs in any fashion, just good, solid songwriting with a touch of magic. A Song Like Yours couldn't be any plainer but in its ordinariness finds a subtle beauty that shines out of its plaintive arrangement. Spring Ahead is aural painting, perfectly framed; a vignette on a relationship forever captured in song. 100,001 is story song about the day-to-day details of life that can bog people down, but turns the tables to find magic in the mundane.

Last Charge Of The Light Horse keeps it simple, and in simplicity finds magic and a complexity that is amazing. Fractures is a thing of beauty, a musical aesthetic that is destined to be under appreciated in a music business with an attention span shorter than that of Tom from 50 First Dates. The overall dynamic here will be too mellow for some, but there is an incredibly vibrant energy that runs through even the coolest of moments on Fractures, but it’s a disc that really requires your full attention. You'll get out of it what you put into it. Fractures is a Wildy's World Certified Desert Island Disc; A classic.

You can learn more about Last Charge Of The Light Horse at www.myspace.com/lastcharge. You can purchase a copy of Fractures at www.cdbaby.com/cd/lcotlh2.
Posted by Wildy at 5:20 AM