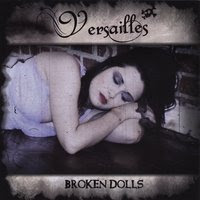 Dianna Marie St. Hilaire grew up enduring a cycle of abuse and heartache, taking refuge in music by artists such as Tori Amos and The Cure. Learning piano and guitar and throwing herself into her own music as a therapeutic firewall, Ms. St. Hilaire transformed herself into Versailles, an artist comparable to child of a theoretical union between Jessica Riddle and Robert Smith. Dark, painful songs full of sad beauty are the order of the day on Versailles’ sophomore effort, Broken Dolls. In a side note, Versailles was the city where the end of hostilities was negotiated at the end of World War I. Whether intentional or not, it’s interesting that St. Hilaire would choose a name associated with the coming to terms for the career that sprouted from her process for making sense of her own travails.

Versailles deals in a brand of darkly melodic gothic rock that isn’t entirely classifiable. Her voice is gorgeous, full of a honey/amber timbre in the lower range and a sweet, breathy soprano on top. Her piano playing has a jangly, rhythmic feel to it; almost as if played by a small (but talented) child. And that’s the key, for whatever sophistication or pain comes through in the music; Versailles is an angry, scared little girl trying to make sense of a world that hurts. Taken as individual songs there is a lot to be excited about on Broken Dolls. Mars is the one track where Versailles really sounds like her influence Tori Amos, and this is probably one of the best songs on the disc. Believe is lush and full of a sorrowful sweetness. Broken Dolls is a little flat energy-wise but has gorgeous harmonies and a vibrant piano part that saves the song. Once is a gorgeous vocal performance that certifies how talented Versailles truly is as a performer. Even Wendy’s Razorblades, the sort of song that parent groups build “ban this song” campaigns around is a fun listen; it’s a unique juxtaposition of a Ben Folds style pop gem with lyrics about an impending suicide.

For all of that, the album taken as a whole is incredibly flat. The melody lines are simplistic without a lot of range, coming across with an almost flat affect fitting for the persona of Versailles, but becoming quasi-monotone over the course of the album. For me personally, I loved individual songs, and would enjoy Versailles in small doses, but this music is really written to appeal to teenage lost souls who in my generation gravitated to The Cure and The Smiths. Whether an honest divulgence of pathos or a brilliantly marketed bit of emotional necromancy, Versaille’s Broken Dolls should find solid footing with fans of The Cure, The Smiths or Tori Amos’ darker material. The pop sensibility and child-like sweetness of Versailles keep this stuff from getting too scary, although from a parent’s perspective I wouldn’t want my own kids listening to this. From a musical perspective it’s a great listen in small doses.
Rating: 3.5 Stars (Out of 5)

You can learn more about Versailles at http://www.versailles.ro/ or www.myspace.com/versailles. You can purchase a copy of Broken Dolls at www.cdbaby.com/cdversailles2.
Posted by Wildy at 5:00 AM

Thanks for this article, pretty helpful piece of writing.