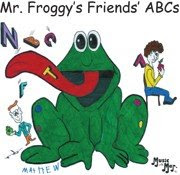 Maryann “Mar.” Harmon is the creator of Music With Mar.; a nationally known music education program for children. Harmon has produced music for over twenty-five recordings, winning two Children’s Web Awards and one Silver Parents’ Choice Award. Harmon holds a Bachelors in Music and a Masters in Education (Early Childhood Education), and manages to balance education and musical enjoyment for her fans/students. Harmon’s latest CD, Mr. Froggy’s Friends’ ABCs continues in the same vein Harmon has followed since her debut in 1993.

Mr. Froggy's Friends' ABCs opens with the title track, capitalizing on the mascot of Music With Mar's shows, Mr. Froggy. Mar explores the alphabet using children’s' names and mnemonic devices to help your young one remember their ABC's. Up next is Green, Yellow, Red, a cute song that helps teach the meaning of the light colors in a traffic light. From having seen it live I can say this is a particular favorite of Mar's fans. Brush Your Teeth is a tutorial set to a catchy rock arrangement that will be fun for both parents and little ones. The song provides a fun teaching moment from parent to child that has both educational and social value.

Mar. puts her own spin on Old McDonald, injecting a little more action and her trademark sense of humor into the mix for a fun listen/play along song. Five Hip Hoppy Frogs is a counting song that was a big hit with the kids when we saw her live. Set to a mild hip-hop beat, Five Hip Hoppy Frogs is a fresh approach that the kids will love. Tell Me The Word is a teaching song about objects in the sky that seems to play well with the kiddos, and Colors helps to learn primary and secondary colors in a fun music setting. Five Monkeys Swinging In A Tree was one of the real crowd favorites when we saw her live show. The song features a message on how to act that is as apt for adults as for their children, and also features Mar's monkey squeal, which you really have to hear to believe. Mar closes out with Watch The Monkey That Moves, a funky action song that will get your kids moving around (and you too!).

Mar Harmon has been doing Music With Mar shows since her debut album in 1993. There are a number of local classes in various parts of the country these days (particularly in Western New York). If you get a chance to check out one of the classes with your little one(s), they're a treat. But the CDs are great listening for the kids and provide a great opportunity for interactive learning between parent and child or for playgroups. In a market glutted with children's albums, Mar Harmon rises with the cream on Mr. Froggy's Friends' ABCs. Check it out.

You can learn more about Mar Harmon at http://www.musicwithmar.com/. You can purchase Mr. Froggy’s Friends’ ABCs in her store.
Posted by Wildy at 5:10 AM

Thank you for reviewing my CD and for the common sense, nice things you had to say. They are truly appreciated and I hope to see you again at my next concert.
Sing-cerely, Mar.