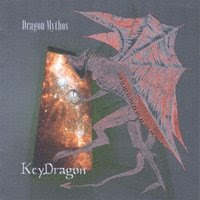 For those of you not familiar with KeyDragon, the California band writes and performs only songs dealing with dragons. Some songs focus on folklore surrounding dragons while others take on original story lines based loosely on dragon myths and stories. The music is a subdued Darkwave Metal sound that is instantly recognizable particularly if you were ever a fan of bands like King Diamond, Type O Negative or mid-to-late Metallica. This is, of course, a niche record, playing to a very limited market of fans. That being said, it’s a decent album. Tamara Venus Star is always pleasant to listen to, and the juxtaposition of her voice with that of lead screamer Ron Langford is entertaining. The primary problem with Dragon Mythos is the uniformity of sound. The songs don’t sound all the same, but there is little enough sonic variation to bog down less than dedicated listeners.

Heart Of A Dragon is the high point of the album, and the midnight undertones of Jawzhar are sure to please metal fans. The Promise is the one true break in style here, slowing things down a bit in a sonic rest before the stretch run. In the end, there’s not enough here to hold the attention of anyone aside from diehard Dragon Metal fans. But those folks will be very happy.

You can learn more about KeyDragon at www.myspace.com/keydragon or http://www.keydragon.com/. You can purchase a copy of Dragon Mythos at www.cdbaby.com/cd/keydragon10.
Posted by Wildy at 5:34 AM