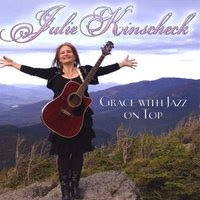 Boston’s own Julie Kinscheck had dedicated her life to changing the world through music. Whether performing on her own, with a Cappella group Faith In Action or PTB, Kinscheck sings about her Faith and belief in God. In 2008 Kinscheck finally took a huge leap of faith and released her debut solo album, Grace With Jazz On Top. Mixing jazz with folk and pop styles, Kinscheck has created a refreshing and vibrant album.

Grace With Jazz On Top opens with Secure Heart, a great little tune that walks the pathway between 1960’s Rock and Country. Secure Heart has the pop sensibility to catch on with listeners. Grace is written in a Rock/Jazz hybrid periodically reminiscent of The Dave Matthews Band. Coffee Song is the highlight of the album; a jazz tune that wants to stray into rockabilly. Coffee becomes the metaphor for romance in a wonderful act of innuendo that’s family friendly. Get In The Water takes us to Dixieland in a pop arrangement. Kinscheck even gets in some mean scat singing in one of the peppier offerings on the album. Other highlights include The Andrews Sisters inspired He Called, Precious, and the martial country tribute to the resilience of Faith: American Memory.

Grace With Jazz On Top is a memorable collection of pop/jazz hybrids full of Spirit. Fans of Christian Pop music will dig Julie Kinscheck.

You can learn more about Julie Kinscheck at http://www.julieksings.com/. You can purchase a copy of Grace With Jazz On Top at www.cdbaby.com/cd/kinscheck.
Posted by Wildy at 5:20 AM

Your favorite, "Coffee Song", may be the theme song for a coffee shop locally- we're working on it. Did you like the "vocal trumpet" trading with the bass and drums? You can see a live video of that song on YOUTUBE.com at http://www.youtube.com/watch?v=-kh4Wgnr-aQ

"American Memory" was meant to be a tribute to those lost 911.