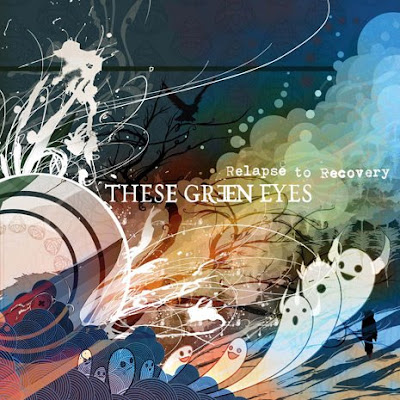 On March 24, 2009, These Green Eyes will release their latest album, Relapse To Recovery. With the first single, Paramedic already hitting the airwaves, These Green Eyes look to make a big splash in 2009. After touring the US the last few years with the likes of Gym Class Heroes, Less Than Jake, Fall Out Boy, New Found Glory and Hidden In Plain View, These Green Eyes have built a significant amount of buzz for the new album. Let’s check it out.

These Green Eyes bring a wonderful mix of melodicism and Modern Rock edge to the masses on Relapse To Recovery. The opening phrases of At The End recall the sound of Simon & Garfunkel before breaking into a melodic but driven rock tune. Big harmonies and the lyric vocals of Colin Cunningham make this a real gem. The song might actually be too good to be truly commercially viable. That’s a theme that runs throughout Relapse To Recovery: Rock songs with strong Pop aesthetics that might be too finely constructed for the current popular mores. Cunningham’s voice is too good, the harmonies are too spot-on and the band is too tight and too slickly produced to fit in with current trends.

Paramedic is a dynamic rocker that should be good Modern Rock radio fodder. The energy here is high and These Green Eyes appear to have the sort of charisma it takes to play big stadiums. Kick The Crutch is another opportunity for Cunningham to show off his amazing pipes in an exhortation of loved one to walk away. Drunk Driver is an energetic rocker with commercial mettle. There’s a bit of punk energy running through this alongside the pop sensibility that seems to pervade everything These Green Eyes touches. Blood Sweat And Beers is a welcome change of pace, stripping away the distortion and frenetic pace for a more lyric performance. Other highlights include Time Of Our Lives, Two Minute Warning and Sucker Punch.

Relapse To Recovery is a great Rock album. Don’t be surprised if These Green Eyes go global in 2009. The band is capable of crafting slick Modern Rock with a Pop feel that should be like candy to a marketplace that gorges on such things. But if the opening track, At The End is any indication, These Green Eyes are capable of even more. Perhaps it was a one time thing, but I don’t think so. There are indications throughout the album of a breadth and depth of creativity that goes beyond the capabilities of your typical charting band. These Green Eyes have a special vocalist in Colin Cunningham, and play together wonderfully well as a unit. The slick production values of producer Brian McTernan (Thrice, Circa Survive, Senses Fail) help to smooth out any wrinkles, but I strongly suspect that those wrinkles may be the best part of These Green Eyes. Enjoy the album, which is killer, and enjoy their probably rise. The more success These Green Eyes have now, the more they’ll be able to explore those wrinkles later on. If you’re a fan of great music then that’s what you want, because these guys are amazing.

You can learn more about These Green Eyes at www.myspace.com/thesegreeneyes or http://www.blackledgemusic.com/. Relapse To Recovery hits shelves on March 24, 2009. You can pre-order your copy through Amazon.com.
Posted by Wildy at 5:10 AM