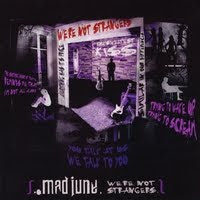 Montreal’s Mad June is an all-female quartet who knows how to rock. Cranking up the amps to eleven, Mad June also know a thing or two about nuance and composition, as you’ll note on Mad June’s debut album,. We’re Not Strangers. Mad June have spent the last few years gigging regularly and honing their sound; it’s time for them to step out and be more than just a Montreal Band. We’re Not Strangers might just be the project to take them there.

We're Not Strangers opens with the intriguingly sparse Rock N Roll of Here Again. Vanessa McLean has a pleasant voice that works well in this reserved setting on a decent melody. The song isn't overly dynamic but is solid. Polaroid seems to take on the fashion world and the unreality both in its proponents and those who watch from outside. It's a well spoken commentary in a strong arrangement that will stick with you. 24 is a tasty bit of modern rock with real radio legs. This could be a breakout hit. November starts out wonderfully well with a catchy chorus that becomes cloying due to repetition.
Mad June breaks out the punker energy on The Stranger Ones, and takes after big business on Corporate Convict. The message here is well received but comes across in awkward terms. Mad June brings a Breeders-like intensity on I Feel It, keeping things simple and compact for a standout song. This leads into Thicker, the piece de resistance on We're Not Strangers. It's the best songwriting on the album; McLean is fully alive here. Any awkwardness or hesitation is gone as Mad June takes flight and shows you what all of the potential that lurks through We're Not Strangers can lead to when it adds up the right way.

At baseline, Mad June is a solid band with decent material, a likeable vocalist and a lot of potential. When everything gels, they are a musical dream machine. Everything comes together on We're Not Strangers for the last song. Let's hope Mad June can recreate that magic the next time out.

You can learn more about Mad June at www.myspace.com/madjune. You can purchase We’re Not Strangers as either a CD or Download from CDBaby.com.
Posted by Wildy at 5:20 AM

Just passing through! I love music too, always great to learn of other stuff out there