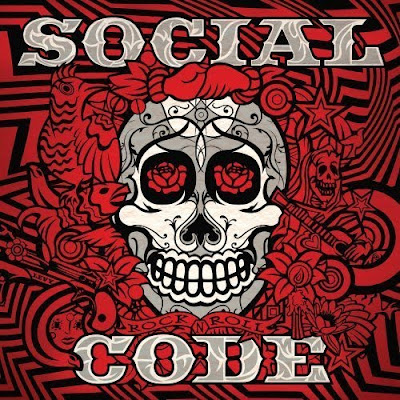 Edmonton, Alberta is the home to Social Code, the quartet led by vocalist Travis Nesbitt that has created waves in the Canadian Rock scene since their 2004 debut, A Year At The Movies. Social Code return with their third album (and US debut), Rock N Roll on March 23, 2010. Social Code is already impacting heavily on Canadian Radio with the opening single, Satisfied, and the future looks very bright indeed.

Talk about melting your face. Social Code doesn't just hit a home run with Rock N Roll, they tear the cover off the ball and pound the cork core into smithereens. Opening with the title track, Social Code eschews cliché by thoroughly failing to break into the big rock sound you expect to explode part way through the song. Travis Nesbitt’s tortured, needful vocal is more a song of longing than celebration; raw in emotion and powerful. It's a surprising and compelling start, and is likely to be talked about as one of the best Rock songs of the year. Nothing Left To Lose will put to rest any questions about whether Social Code is for real, ripping into a big Classic Rock sound that's part Aerosmith, part Whitesnake and part Bob Seger. Add in the big rock chorus and Arena-rock harmonies and you have something bordering on an instant classic.

Satisfied is an honest, up-front one night stand song. It's full of the testosterone-laden braggadocio and big hooks; a well-written tune with a high commercial ceiling. Perfect Grave is a sharp left turn, focusing on the death of a loved one at their own hand. It's a song of mourning as well as a statement of strength and perseverance. Creed fans will love the big open sound, which does sound a bit formulaic, but the content is meaty enough to avoid a purely "commercial rock" label. Social Code hits radio gold on Buy Buy Buy, a highly danceable dose of Rock N Roll that get you moving from it's opening notes and will stick with you.

Fight For Love is a strong Rocker with real Mix Tape potential; a romantic hip-shaker that's just great songwriting. You Never Know You Got Until It's Gone reminded me a bit of Sammy Hagar-era Van Halen because of the guitar work. The song itself is built on a great melody and a big hook, and is likely to be a fan favorite. I'm Not Okay goes a bit above and beyond the usual rock ballad; dealing with heartbreak in unvarnished terms. The songwriting here is surprisingly good, producing a song that's not only memorable but meaningful. Social Code close with Too Late For Tomorrow, a bit of a comedown from the rest of Rock N Roll, but decent for all that. I guess you could call it a safe, soft landing.

Social Code manages to put forward a highly commercial sound on Rock N Roll without sounding like they're trying to. There's a talent to this that some artists simply possess. It can't be taught or acquired, it's more of a touch. Whatever you want to call it, Social Code has it and exploits it thoroughly on Rock N Roll. It's hard to predict the next ten-plus months, but it's hard to imagine Social Code not landing on year-end lists with Rock N Roll (the album), and if there were ever a breakout Rock tune waiting to happen, it's Rock N Roll (the song). Make sure you introduce yourself to Social Code. I have a feeling they're going to be sticking around the party for a long time to come.

You can learn more about Social Code at http://www.socialcodemusic.com/ or www.myspace.com/socialcode. Rock N Roll drops March 23, 2010. You can pre-order a copy from Amazon.com, but expect wide availability across traditional and virtual retail as well digitally.
Posted by Wildy at 5:58 AM

A great deal of effective information for me!