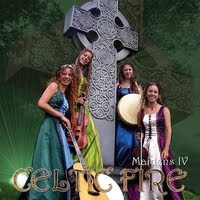 Sisters Havilah, Heather, Abigail and Tabitha Justice have been bringing their brand of musical mirth to audiences since 2006, when Maidens IV was born. The idea actually started in2 003, when Havilah and Heather formed Maidens II and began performing at Renaissance Festivals, Celtic Fairs and the like. As each successive sister has joined the band so has grown the numeric, the sound and the legend of this young quartet. Hailing from Loudonville, Ohio, The Justice girls grew up in a family of nine home-schooled children where music was considered to be a normal part of a well-rounded education. Lessons inspired passion, and today Maidens IV is perhaps one of the fieriest Celtic bands on the go. Their latest album, Celtic Fire, displays the pure joy, aggressive melodicism and complex interplay that set Maidens IV apart from the pack.

Celtic Fire opens with Waves of The Wind, a lively, rhythmic instrumental. Maidens IV show an aggressive playing style that bears out over the rest of album, going for the throat of the song early and wringing every bit of life out of it they can. The arrangement is highly intricate and interwoven in a fashion that perhaps only sisters could achieve. Heart Of The Brave adds the Justice sisters angelic vocals to their aggressive style of play and wraps it in deep Celtic influences. Lead vocalist Heather Justice is absolutely amazing here. Dark Dancing Waves Medley is a vicious/delicious mix that bowls the listener over and dances away before you even know what hit you. You'll be hitting repeat just to make sure the musical train was for real and not imagined.

Hallelujah underlines Maidens IV's deep musical roots in faith, although the spelling out of the title is quaint to the point of cliché. The melody here is gorgeous, and the swarming, darting voices of Maidens IV are like a balm for the soul (or at the very least, the ears). Gypsy Firelight Tune features the Maidens' aggressive and powerful Celtic instrumental work. I suggest you simply hang on and enjoy the ride. Rocky Top is next; a song first recorded by The Osborne Brothers and popularized by Lynn Anderson. Rocky Top has become a Country classic. The Maidens lend their voices to the song's history with an almost Baroque Country arrangement. The harmonies are exquisite; the arrangement is enough like the original to feel comfortable and different enough to shed a shaft of new light on an old favorite.

Friesen Winds shows a softer side to the Maidens. The instrumental piece is more legato than their usual cutthroat instrumental style. The instrumentation is still heavily layered and enmeshed, but speaks of a gentler musical feel that is a nice change of pace. Hymn Medley is a musical Wow moment. It doesn't matter whether the subject matter of the songs is your cup of tea or not. You will be absolutely in awe of the Maidens' voices here. Maidens Medley is another feisty instrumental that leads into an a Cappella version of Irish Blessing that sounds like an old English Madrigal. The arrangement here is gorgeous. Fiddlers Drums takes us on another instrumental jaunt, staying with the gentler feel of the second half of the album and leads into The Prayer, an ethereal and pretty experience. Maidens IV close out with a Cappella version of the Star Spangled Banner that sounds better than 99% of the performances you'll hear at major sporting events.

Maidens IV have established themselves as a solid regional act in their home state of Ohio, playing churches, Celtic fairs and other period events. Their costumes on stage speak of another era, and their music will transport you to a time and place that's outside of your day-to-day experiences. Celtic Fire is brilliant in its audacity, songwriting, musicianship, as well as in the connections shared and forged by Maidens IV therein. A generation or so ago Maidens IV would be featured on national television through outlets such as Ed Sullivan and Lawrence Walk. They have that sort of broad appeal, but a modern sense of fire that helps them transcend the "easy listening" veil and be relevant for today. Celtic Fire is a Wildy's World Certified Desert Island Disc, and Maidens IV are the sort of band you resolve to see live at least once in your life if you get the opportunity. Just do it.

You can learn more about Maidens IV at http://www.maidensmusic.com/. You can purchase Celtic Fire as either a CD or Download from CDBaby.com.
Posted by Wildy at 5:10 AM

Enjoyed reading your review. One thing I would note is that on "Heart of the Brave", Tabitha Justice, the youngest Maiden, does the lead vocals for that song. She also does them on "Hallelujah" and "The Prayer".
Thanks.