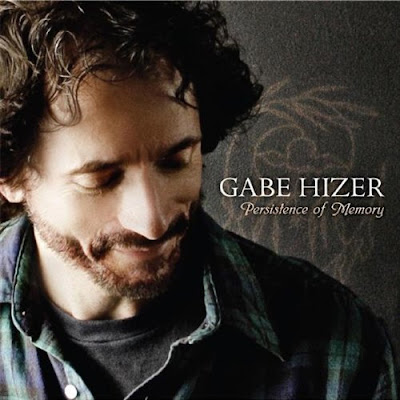 Gabe Hizer's path to his debut album, Persistence Of Memory, isn't quite what you'd expect. The Berklee College Of Music Grad went on to Boston University Law School, spending the next two-and-a-half decades in the practice of law. Retiring in 2007, Hizer moved to Mexico for four months with two cats and various tools for creating and recording music. This interregnum brought back Hizer's passion for music and with it a prodigious number of songs. Upon returning to the US, Hizer packed up his belongings in his home in Boulder, Colorado and struck out for Nashville. Persistence Of Memory, due out April 5, 2010, is a living document of this period of upheaval and renewal in Hizer's life.

Persistence Of Memory opens with "Memory", a highly emotional song that remains vaguely opaque in meaning. Hizer displays a keen sense for melody here as well as on "Forever", a love song destined for the mix tape circuit. Hizer's voice is a bit rough at the upper edges of his range with a Gordon Lightfoot rasp that might be an acquired taste. Short of the high notes his voice is very pleasant. "The Ballad Of Joey And The Bottle Of Booze" relates a (likely true) story about a man arguable wrongly convicted and wrongly released, highlighting the ability of bureaucracy to produce almost any result imaginable. Hizer's tale is a classic American tale of justice being done by unintentional means and seems like it could become a folk favorite.

There are certain folks in the world for whom the land they live on is their greatest connection to the world. Hizer features such a voice in "Under Western Skies", a highly personal feeling tune that lists dangerously close to over-emoting. Hizer crashes through this barrier on "Falling Down", going over the top and pushing high into an upper range that obeys his wishes but doesn't always serve him well. Hizer gets a bit of gospel and blues going for him on "Searchin' Outside For My Soul". This is the most dynamic performance on the album and the best songwriting. Hizer discusses an aging parent who is now living in a nursing home in "Some Things Never Change", a conscience clearing tune that works more as a self-serving piece than as storytelling. "Let Me Fall On You" is a love song of sorts; a man asking for love not out of his strength but out of imperfection and humanity. The soulful arrangement works well in what is an atypical approach to a ballad. Hizer closes shop with "Paris Cafe", a paean to a relationship that didn't work out years before. The wounded hero has run off to Paris to forget, but can do nothing except remember as he looks out on the Seine.

Persistence Of Memory gets high marks as a songwriter vehicle. Hizer has a distinct talent for crafting melody and wrapping it in arrangements to suit. As a story teller, Hizer displays a strong talent encapsulating moments, feelings and even people in song. As a performer, Hizer is excellent, although the upper ranges of his voice are both a blessing and a curse. Hizer can still hit notes that many singers his age can't imagine, but the gruff edge to his voice up top can be grating. All told, Persistence Of Memory is a solid first effort. You'll wish Gabe Hizer had quit his day job sooner.

Rating: 3.5 Stars (Out of 5)
You can learn more about Gabe Hizer at http://www.gabehizer.com/. Persistence Of Memory and April 5, 2010 release on CD. If you can't wait, you can download the album now from Amazon.com.
Posted by Wildy at 5:10 AM

GabeHizer said...
Hi: Thanks for the nice review! Since you enjoyed "The Ballad of Joey and the Bottle of Booze," you might like the animation video I had made for that song, here: www.YouTube.com/gabehizer