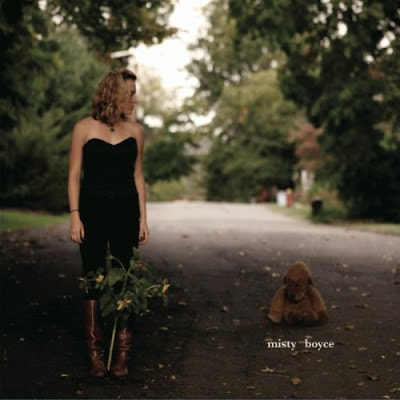 New Mexico native and New York City-based Misty Boyce got her feet wet as a professional musician playing keyboard for The Naked Brothers Band. Don’t let her tween-pop roots fool you, however; Boyce is a serious songwriter in her own right, with a drop-dead voice and a style that compares well against folks like Regina Sarah Slean, Regina Spektor and Tori Amos. Boyce’s debut album, Misty Boyce, is due out on March 30, 2010 on Modern Vintage Recordings

Boyce opens with “Razors”, a jaunty, angry tune very much in the style of Sarah Slean. Boyce admonishes an old love to go away, although methinks she doth protest too much. It’s a great composition, and the layered vocal harmonies are a great accent. “Trouble” is a highly stylistic ballad; a sad soliloquy from a broker person who’s taken satisfaction in being broken but is now turning away someone who would be good for her for fear she’ll ruin him. It’s a case of tragic redemption through self-sacrifice. Boyce surrounds this story with gorgeous instrumentation and a near-perfect arrangement. Boyce gets a bit more pop-oriented on “Be A Man”. Written from the perspective of a child acting out because of a divorce in the family and a new woman in dad’s life, “Trouble” is an amazingly stark and potent bit of songwriting. Don’t be surprised if this one gets licensed for movies and television

“How Long” is a delicious mix of intense emotions in a stark arrangement and a distinctive pop sensibility. “Regrets” seems more rueful than anything else, mixing regret and a positive outlook in a viable power-pop arrangement that works well for Boyce. The best pop songwriting on the album comes in the form of “Love You Down”, a song that might win the title as “ultimate come-on song”. Do not be surprised if “Love You Down” becomes a mix-tape favorite. Boyce wears her heart on her sleeve on “Slow Burn”, a nearly mournful tune of devotion. The arrangement Boyce crafted for “Slow Burn” is a gorgeous mix of dark and light; hope and pain. “Dutch Girls” is stark and needful; a song about loneliness in a digital age where we are drawn closer and closer to each other even as we grow more confined within our digital walls. There is an over-arching sense of loss that runs throughout Misty Boyce, which turns out to be something of a post-breakup album. Boyce doesn’t leave you mired in the emotional ruins however, ending up in the self-awareness and hope of “Snowed In”. “Snowed In” finds Boyce forced to stop for a day and see her life as it is; and realizing that things are okay. It’s not healing, per se, but certainly a sign that all will be well.

Misty Boyce announces Boyce to be a musical force to be reckoned with. Comparisons to Regina Spektor, Sarah Slean and Tori Amos are all well-founded, but Boyce is her own songwriter, and one senses that over time her sound might become even more distinctive. As a freshman effort, Misty Boyce approaches brilliance.

You can learn more about Misty Boyce at http://www.mistyboyce.com/ or www.myspace.com/mistyboyce. Misty Boyce drops on March 30, 2010. You can pre-order the album as either a CD or Download from Amazon.com.
Posted by Wildy at 6:55 AM

Very helpful info, thank you for your article.