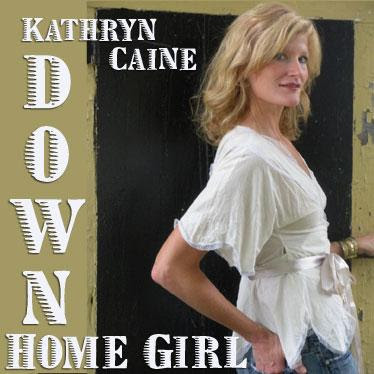 Kathryn Caine is a North Carolina girl transplanted to Virginia who’s been performing regionally and on the Nashville scene for a dozen years now. With High Lonesome streaking through her voice, Caine has been a demo and backup singer as well as performing with her own band. With three albums under her belt, Caine will release her fourth, Down Home Girl, on October 31, 2009.

Caine gets things rolling with a song about the draw some people feel to the road. Wheels is upbeat, accessible and danceable without sacrificing a thing. Far Away is a song of unrequited love. The guitar work here is incredible and worth trying to figure out if you're so inclined. Caine is in fine voice, which is vaguely reminiscent of Dolly Parton's but in a lower register. Settlin' Down might just be the next big anthem of the small-town country girl. The bluegrass arrangement seems to say how things will go in a relationship; the song is an instant classic. The Fall makes for compelling listening; it's a song for cynical people on the verge of love. The Fall is well-written and intelligent with a melody that will stick around well after the CD/download ceases to play.

For You is an adulterous love song where the protagonist is plotting continue her affair while hiding it from her husband. The song plays like something from a Country-flavored Broadway Musical. Honeyhill crosses over into Rock N Roll country for an ode to the narrator's favorite place on earth. A strong melody combined with knockout vocal harmonies make this a big winner. My personal favorite song on the disc is Working Man, a well-written piece of Country/Pop, setting the stage for the closing number, The Dream. This tune is a heartbreaker about a little brother who passed away young and how he continues to make his presence felt. The song is beautifully written and if you don't have a tear in your eye by the end you probably weren't listening.

Kathryn Caine dazzles on Down Home Girl. Based in Country but dabbling with Folk and Rock N Roll, Caine's dynamic Country debut is among the elite debuts in 2009. Her voice has a classic country sound, and Caine always sounds like she's giving her heart on every song and enjoying it completely. Make sure you spend some time with Kathryn Caine and Down Home Girl!

You can learn more about Kathryn Caine at http://www.kathryncaine.com/ or www.myspace.com/kathryncaine. Down Home Girl is due for release on October 31, 2009. Keep checking Caine's website for where/how to purchase copies/downloads.
Posted by Wildy at 5:10 AM

The Cd will be up at Cdbaby and itunes shortly as well as digstation!!

Great music- I call it "roots" music. Favorites are Honey Hill and Working Man-- sophisticated arrangements and incredible songwriting. Tells a story about a life lived where every minute has/had meaning. Songs will appeal to the folksy crowd as well as rock. Great arrangements and foot-tapping tuneage. Highly recommend to anyone-